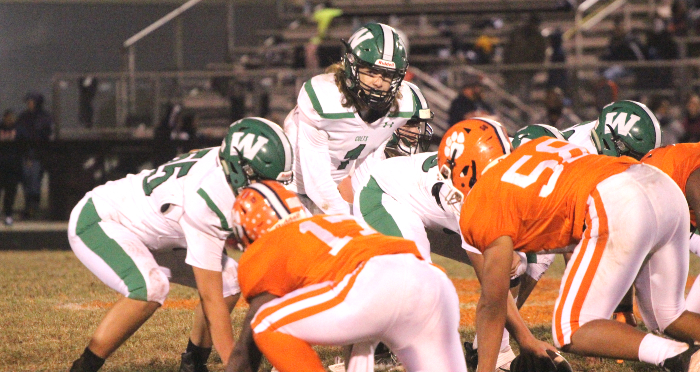 Jordan Manshack calls out the signals for West in a road game this season. (File Photo)

An overtime varsity football win for West Stanly last season factored into a decision for Mount head coach Michael Johns as the Tigers went for two in the final minutes and earned a one-point win over the Colts Friday night, 18-17.

West Stanly (8-2, 2-2 RRC) pulled ahead with 2:09 left in the game on a Braden Hartsell two-yard TD run. Jordan Manshack then added a two-point conversion which put the Colts up 17-10.

Mount QB Ryan Tyson scored on a two-yard run with 47 seconds left putting the Tigers (4-7, 2-2) down by one. Head coach Michael Johns decided to go for two even though his team had failed on a pair of two-point attempts last week.

Johns said his decision came after watching West in overtime last season against Anson, a win for the Colts,

“I thought about it all week. I didn’t want to get into an overtime match with them because they are good about getting downhill, getting 3 or 4 yards a carry,” Johns said.

The play, a bootleg which Johns said his team worked on this week in practice, worked as Tyson found Sawyer Osbourne with a pass to put the Tigers ahead.

West head coach Brett Morton credited the play of Hartsell and several other JVs who were called up this week since the JV game between the two schools was played several weeks ago.

“We had guys step up and fill roles we needed. They played hard. We made too many mistakes tonight,” Morton said.

“I’m proud of the guys. They kept fighting all the way to the end.”

The Colts led 9-0 after an early safety and a Manshack 11-yard TD run in the final seconds of the first quarter.

Miller scored from eight yards out for Mount in the second quarter, leaving the Colts up by two at halftime.

Hartsell led West with 78 yards on 11 carries with a TD while Manshack added 51 rushing yards and a score.

West Stanly received the No. 8 seed in the 2AA West Regionals and will host a first-round playoff game Friday against No. 9 Owen (6-4).