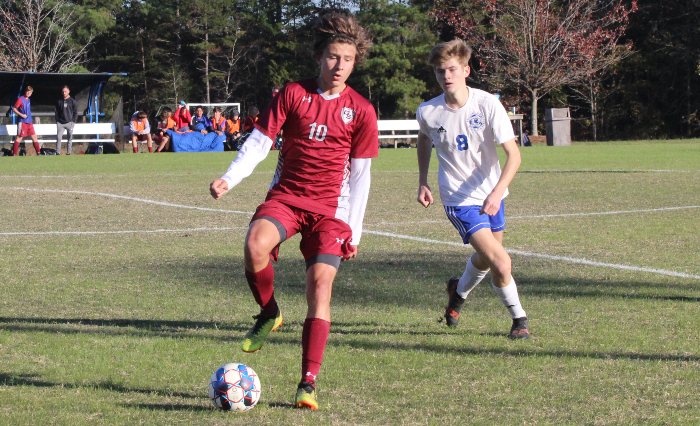 Andrew Beohler controls the ball in the midfield in the first half of Saturday's playoff game. Beohler scored a goal in the win. (Photo by Charles Curcio)

After having not played since October 29, the Gray Stone men’s soccer team took to N.E. Lefko Field at Pfeiffer University and shut out the Highland Tech Rams in the second round of the 1A state playoffs, 3-0.

Erich Strohecker led Gray Stone (18-2-1) with an goal and an assist while Judson Bullard scored his 22nd goal of the season.

After controlling possession early but not generating scoring chances, a foul about 30 yards out set up a free kick in the 19th minute.

Bullard, having moved up from his defensive position, ran behind the defense, got a touch on the ball and scored.

“Luckily I had time to find the corner. I was able to box him out almost,” Bullard said about receiving the kick and scoring.

He added the goal was a breakthrough early for the Knights.

“We were controlling (possession) but we needed one to spark the energy. That did it,” Bullard said.

Gray Stone maintained the one-goal lead through halftime, then extended its advantage in the 55th minute when Strohecker scored off a corner kick.

“I was going to try and hit it back post to Andrew. I tried to trick the goalie. I guess the wind carried it in back post,” Strohecker said.

The Knights added a third goal in the 69th minute when Andrew Beohler scored with the assist going to Strohecker.

Knights head coach Brad Harrington said last season his team was able to get the jitters of a playoff game out of the way having played in the first round.

This year was different because of the time off between the last two games.

“We haven’t played for almost two weeks so I knew the toughest part of the game would be the first 10 to 20 minutes. Getting (the first goal) calmed us down a little bit,” Harrington said.

Possession of the ball has been one of the Knights’ strongest characteristics this season, according to Harrington.

“We have been able to control possession in a lot of games which forces other teams to have to focus on winning the ball back in a bad situation,” Harrington said.

“We’re looking forward to Bishop. We know they are a quality team. They beat Mount Airy, who was ranked No. 1. It’s going to be a challenge,” Bullard said.