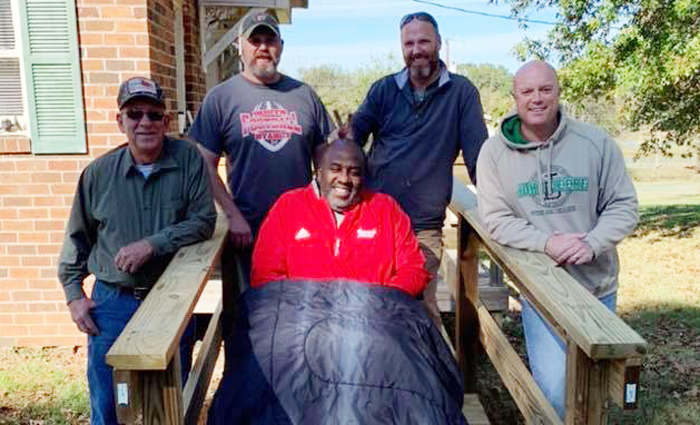 Darryl Gerald sits on the ramp recently built for him at his house. With him from left are Ray Smith, Rob Huneycutt, Davis Gibson and Stanly County Sheriff Jeff Crisco. (Contributed)

Venturing inside the borders of a high school football field during a game can be dangerous for the players but the sidelines can be just as hazardous as the action of a game does not always stay between the lines.

In the case of South Stanly assistant coach Darryl “Pork Chop” Gerald, a collision during the Bulls’ road game at West Stanly led to a horrific injury.

As Gerald recovers, though, the South Stanly community has rallied around this volunteer, including recently when people gathered to build a wheelchair ramp at his residence.

Gerald, was injured in South’s road game at West Stanly Oct. 18. when Bulls quarterback Jaquez Cooke was tackled by West’s Gavin Hudson, who slid out of bounds into the South assistant coach.

“I stepped to my right because I could see them going out of bounds. The play was past me…I tried to kick my foot back but my turf cleat got caught,” Gerald said.

He suffered an acetabular fracture of the socket of his right hip bone as the head of his femur bone pushed up into the hip, causing two fractures.

Gerald was told after the incident he would not be able to put weight on his hip for 10 to 12 weeks, which has necessitated his using a wheelchair.

Along with his work as a sheriff’s deputy in Stanly and a captain at Central Rural Fire Department, Gerald also works part time for another volunteer fire department in Marshville and contributes his time to the South football program as an assistant.

“I took time off from the Sheriff’s Office to coach at these games because it’s so imporant to me,” Gerald said.

The assistant coach credited head coach Ryan Ochier for helping to organize the efforts to have the ramp built.

“He has done so much for South Stanly High School, not just the football team…he helps make responsible adults,” Gerald said.

Ochier said it took just 30 minutes of phone calls to get lumber donated from Cohen Construction and construction work from Davis Gibson to get the ramp built.

“It just shows how much he means to the community,” Ochier said. “Darrly has been a great person for these kids, teaching and caring for them. This community stands behind those who stand behind the community.”

“There are so many people helping me and wanting to help,” Gerald said.

He volunteers his time and works for different organizations because he enjoys doing them, Gerald explained.

Despite numerous awards he has earned for his efforts, Gerald said he if he had never had earned one of those awards he would continue in those pursuits.

Gerald thanked everyone in the community for their assistance, saying the help has been a blessing .