Residents still at odds with smell at counseling service 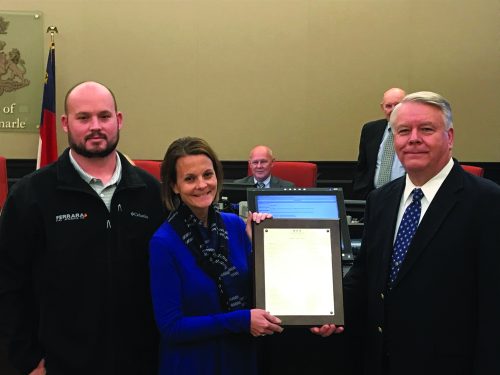 A delegation of College Park residents appeared before Albemarle City Council Monday to renew their allegations of a nuisance resulting from two horses boarded at the Creative Counseling Solutions facility on West Main Street.

Jerry Myers and Mike Lambert, both residents of Royal Avenue, delivered a number of concerns to council.

Myers said since open pens and storage for animals kept at kennels and veterinary facilities are not permitted, neither should they be allowed for horses.

“A stable should not be allowed in a GHBD (General Highway Business District) zoning,” Myers said. “It is not specifically listed as being allowed there, nor is it consistent with any of the other allowed uses regarding animals.”

Lambert followed by distributing photographs he had taken of the Creative Counseling property between Sept. 28 and Nov. 17.

“We first came to you on Aug. 5,” said Lambert, whose primary complaint is that the facility’s proximity to his home causes foul odors and flies. “We thought this would be handled quickly and our concerns would be heard.”

At a September meeting, a number of speakers supporting Creative Counseling had indicated their willingness to come to the facility and remove the horse droppings, but Lambert and Myers said this has not been done.

“Most of these people were not residents of the city and do not pay city taxes,” Lambert said. “These people stated they would be glad to come scoop the poop rain, shine, snow, hail, whatever. This has not happened.”

Lambert also said an order to move the pasture fence 200 feet from his house within 30 days has not been met.

“We also were told that the poop would be scooped daily and put in a fly-proof container to hold the nuisance down,” Lambert stated, referring to the photos he had distributed. “I just go over there every couple of days and take a picture or two.”

“We have a pool, and would like to enjoy it in the summertime,” he said. “I admit it (smell and flies) won’t be as bad during the winter, but I’d love to know that I’ll be able to enjoy my pool when it warms up…all the folks in our neighborhood say the same thing…the flies have got worse since the horses are there.”

“Nobody wants to see this business closed, but I’m disappointed that with all the people that stated they would remove the droppings, it apparently is not happening,” Aldridge said.

Planning and Development Services Director Kevin Robinson said he had visited the facility two weeks earlier, but did not perceive the conditions to be as poor as indicated by Lambert and Myers.

“I saw a couple piles when I was out there, but it was not anything obnoxious,” said Robinson, “and I’ve been to yards at houses with several dogs that were worse.”

City Manager Michael Ferris said he will ask Albemarle Police Department to monitor conditions at the facility regularly, and Mayor Ronnie Michael noted that Creative Counseling and Stanly Community College have reached an agreement that would provide additional pasture space for the horses, and that the lease should be in effect and fencing in place by Jan. 31, 2020.

When asked by Councilman Chris Whitley if he had reached out to Creative Counseling Director Dr. Laura Harbeson, Lambert replied he had not.

“She don’t want to communicate with me, and I’d just as soon not either,” he said.

In other business, the council:

• Presented a resolution to the 2019 Stanly County Principal of the Year, Emily Shaw of Albemarle High School.

The next regular meeting of City Council will take place at 7 p.m. Dec. 2.