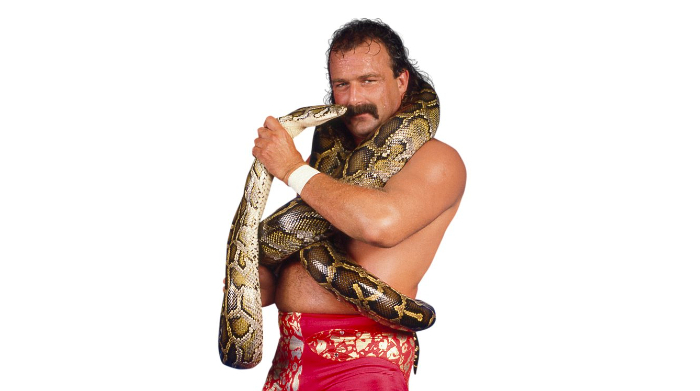 Jake "The Snake" Roberts will bring his comedy show to Albemarle Monday night.

He was known in the 1980s as being one of the most cerebral professional wrestlers with his promos and in-ring style.

Now, Jake “The Snake” Roberts brings his Dirty Details comedy tour to Albemarle for an event at Tiffany’s at the Boardroom Monday. Tickets are $30 for the event.

As part of the ongoing series hosted by Tiffany’s, Roberts will have a meet-and-greet with fans at 7 p.m. along with an evening of telling stories from his 36 years spent as a professional wrestler.

Tiffany Dahle, owner of Tiffany’s at the Boardroom, has been putting on stand-up comedy shows for about two years now.

“A lot of people in town said it would never work,” Dahle said. “I thought it was the craziest things I’ve ever heard. I can’t imagine people from Stanly County just don’t like to laugh.”

Taking a challenge because she said that’s the kind of person she is, Dahle helped get the series going, which will now include a night with a noted personality in professional wrestling.

Through social media platform Instagram, Dahle became one of Roberts’ top-ranked fans, so it became a contest to see if she could get him to do his show in Albemarle.

“I would almost obnoxiously post about how he could come south or come to Albemarle. I honestly never thought it would happen,” Dahle said, noting she grew up watching wrestling with her father.

Beyond stories of the mat, Roberts said his tour also touches on the darker aspects of his life, including his battles with addiction.

The coldness and darkness he portrayed in the ring and on the mic, he said, came largely from an abusive upbringing.

“When you’re a kid going through that, you learn to lie pretty quickly and you know you’ve got to be convincing,” Roberts said. “I never look at someone. I look through them. That’s my approach. By doing that, you tend to be able to grasp people and pull them in.”

Roberts worked for the World Wrestling Federation during the height of its popularity in the mid-1980s, including wrestling before a reported 93,000 fans at the Pontiac Silverdome at one of the industry’s most highly regarded events, Wrestlemania III.

When he would record promos for various events, Roberts said he always kept it real and believable.

“I didn’t say things that I couldn’t do. It was an important thing,” Roberts said. “If you do, you’re just another liar. I always said things that were possible for me to do and probable.”

He takes the same approach with his storytelling for the tour, relating stories about himself and others during his 36-year career in the ring.

“I’ve got 36 years of stories. I’ve got enough material to last probably 25 years. It just gets better and better,” Roberts said.

Roberts said telling stories to people close in proximity to him like in a small club is like wrestling in the ring.

“The audience is there, so close and up front, within four or five feet of these people. It’s like you can feel their chairs sliding toward me,” Roberts said.

While the road stories generate laughs, Roberts said he also talks frankly about his battles with drug addiction in more serious moments and about getting clean.

A recently released documentary, “The Resurrection of Jake the Snake,” showed Roberts getting sober through the yoga program of fellow wrestler Diamond Dallas Page.

“I worked it. I did it. I believe it’s a great product. If more people did it, I think they’d be more aware of a lot of things,” Roberts said. “That’s what this tour is all about…sure I tell some nasty stories. They are gross, some of them, but I’m also going to take you down that dark road and try to shake you a little bit, try to inspire some people.”