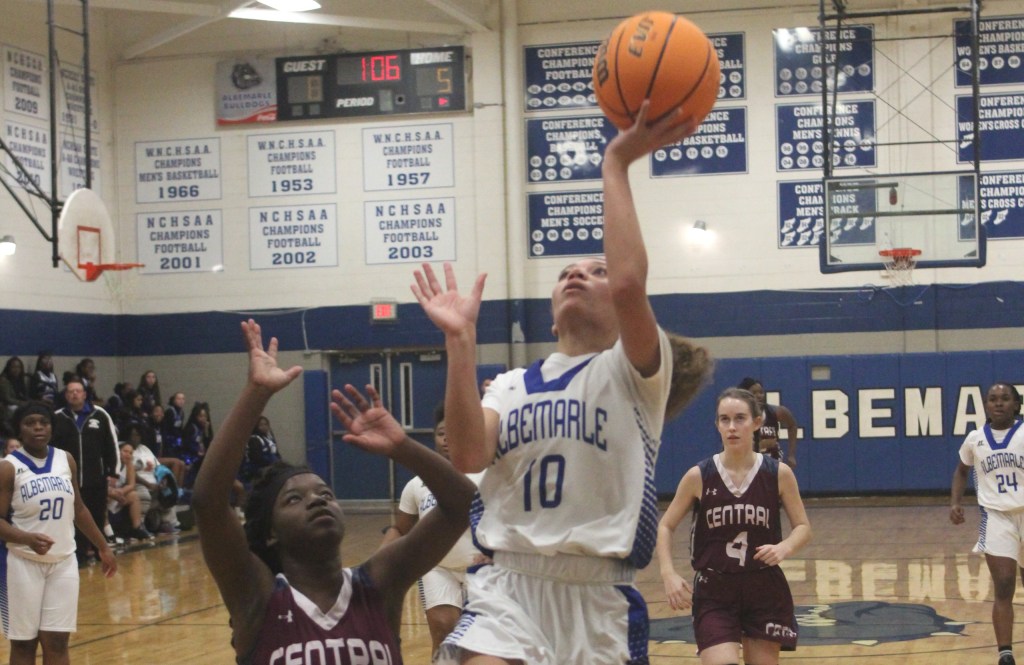 Krystin McLendon glides to the hoop for two points in the first quarter of the Bulldogs' game Wednesday. (Photo by Charles Curcio)

Playing for the second time in as many nights at home, the Albemarle women’s basketball squad dropped to 0-2 falling in the final seconds Wednesday to Central Academy, 44-41.

Kadajah Little had a chance in the waning seconds to tie the game for Albemarle but her three-pointer missed and the Cougars ran out the clock.

Albemarle lost the lead early in the fourth quarter but battled back with 3:20 left. Little sank a three and was fouled, missing the free throw but putting the Bulldogs up, 37-35.

Krystin McLendon led the Bulldogs with 19 points and put Albemarle back up 39-37 with a runner in the lane at the 2:04 mark.

“We are overall a very young team with a simple focus of getting better everyday,” Albemarle head coach Eric Davis said.

“As the players learn and grow into their new roles, we will consistently improve and get better.”

Davis also said playing the night before, losing by 10 to Montgomery Central, made fatigue a factor.

“It’s a tough turn but that’s no excuse for us. We know how to handle that…we were not the defensive team we expect to be tonight,” Davis said.

The Bulldogs are 0-2 for the first time since the 206-17 season and go for the team’s first win of the season next Tuesday at West Stanly.