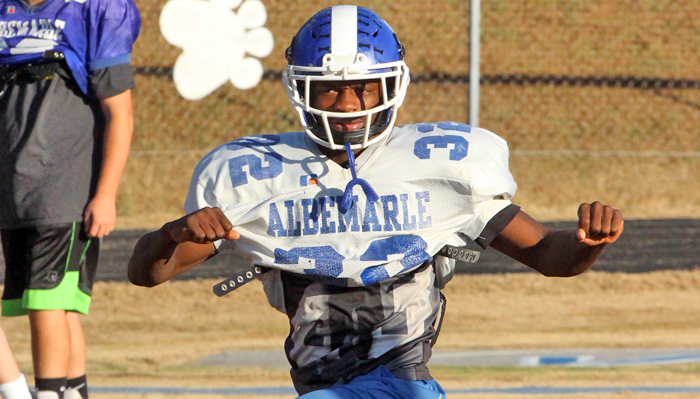 Albemarle’s Julius Smith warms up in practice this week as the Bulldogs prepared to continue in the playoffs. (Photo by Charles Curcio)

Figures in history who were noted for their quiet nature, like the 30th President of the United States, Calvin Coolidge, led by example instead of using words.

Such is the case of Albemarle running back Julius Smith, whose play of late has helped elevate the Bulldogs to the program’s first playoff win since 2013.

Smith, along with twin brother Josh and their teammates, helped lead the Bulldogs to a 55-6 win at Hayesville last Friday. Along with scoring six rushing touchdowns and rushing for 205 yards, he also had five solo tackles.

Listed on the roster at 5-foot, 9-inches tall weighing 149 pounds, Julius’ play has belied those numbers this season. He has seven games with more than 100 yards rushing and has 23 touchdowns. Sixteen of those TDs have come in the last four games of which Albemarle won three. He has rushed for 1,499 yards this season.

Bulldogs head coach Richard Davis said much of the team’s recent success has come in part from the offensive line finally getting healthy after suffering early injuries in non-conference play.

“When we got healthy up front, that’s when things took off,” Davis said.

“(Julius) has bee playing well all season. It’s just that we got healthy up front. The protection got a little better for him and he’s taking advantage of it.”

Smith agreed saying he would not be able to do the things he has recently without the front five.

“They have blocked well for me and work hard at practice. It shows in the games,” Smith said.

Julius also said the team made a lot of mental mistakes early in the season.

“Some kids were soft but we worked through that in practice. They can’t be soft,” Smith said.

Expectations for the season were high coming in, Smith explained, because the coaching staff knew the players were capable of playing at a high level.

“They expected us to do what we were supposed to do,” Smith said.

Showing how the team to prepare with his example of hard work, Smith said he knows what he can do for the team.

“I know what I’m supposed to do,” Smith said.

He also said he does not feel pressure to be the example for the team.

One factor which continues to drive Julius is sibling rivalry with Josh who plays wideout. Both have run track at a high level for the Bulldogs as well as play football.

Julius said basically everything he and Josh do is a competition.

“We push each other to do better,” Smith said.

Of course, when asked who was faster, Julius said he was and said Josh would disagree.

Davis said anyone watching Julius play football would not have any doubt about whether or not he could play at the next level in college.

“He’s a man of few words. You don’t have to worry about him doing the wrong thing. He’s either getting ready for track or working out,” Davis said.

Coaching both Julius and Josh, Davis said any lack of talking Julius does, to which he wishes he talked more to the team, Josh makes up for it.

When Josh battled some knee problems this season, Davis said he could see him chomping at the bit wanting to produce like his brother had been.

“We had a rough non-conference. Everybody was writing us off as dead,” Davis said.

One game which turned things around very nearly went Albemarle’s way. The Bulldogs had YVC champion North Rowan down late in the fourth quarter at home but the visitors survived with a three-point win, the closest result for the Cavs in conference this season.

“We played North Rowan and everybody were like, ‘You don’t stand a chance.’ We came together and showed what we were have capable of doing and we should have won it,” Davis said.

“Ever since then, I have seen a difference in our confidence level as a team. If we play our game, we can play with anyone.”