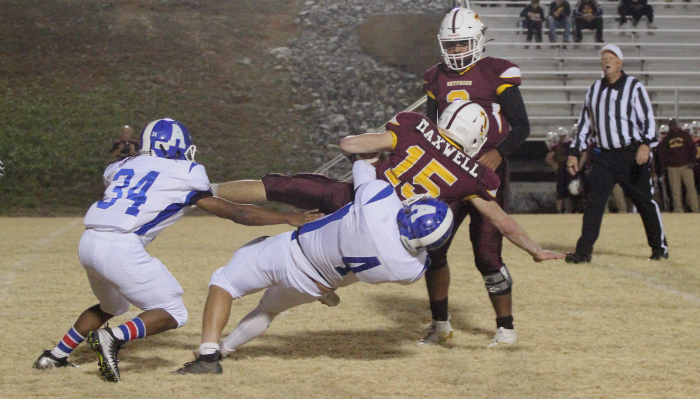 Albemarle's Adrian Little makes the tackle in the backfield for a loss in the first quarter of Friday's playoff game. (Photo by Charles Curcio)

The Albemarle football team went on the road Friday night and limited the host Gryphons of Thomas Jefferson Classical in a second-half stretch eventually losing 40-0 in the second round of the 1A state playoffs.

The Gryphons (11-1) jumped out quickly to a 12-0 advantage scoring on drives of 70 and 50 yards on the hosts’ first two offensive possessions of the game, using a no-huddle offense.

Grant Logan found Dakota Twitty on fourth down in the end zone for a 9-yard TD pass on the first drive. Logan later scored on a 1-yard plunge with 3:01 left in the opening period.

“We have a resilient group so I wasn’t concerned about (the no-huddle) at all,” Albemarle head coach Richard Davis said.

After getting behind, Albemarle’s defense shut down Thomas Jefferson for the remainder of the half.

“I thought we were going to do a better job up front with our defensive line,” Davis said.

“I thought we had an advantage there. They totally wiped us out. They whooped us in the trenches.”

As the game wore on, the Gryphons started to find the end zone, scoring twice in the third and fourth quarters.

Albemarle’s offense was dealt another blow with 6:44 left in the third when starting quarterback Antonio Burns went down with an ankle injury for the rest of the game. Josh Smith took over at QB and completed his first pass to Malachi Baldwin but a sack forced a punt.

“Little things just didn’t go our way tonight. Just one of those nights, it seemed. Our kids played hard and left it all on the field tonight. You can’t ask for any more then that,” Davis said.

The Bulldogs finished the season 5-8 with last week’s playoff win breaking a streak of six seasons without a postseason victory.

“I told the underclassmen that the seniors laid a foundation. Now it’s their job to step up, continue to work and take it a step further. We have to have a great offseason and not be satisfied with getting to the second round,” Davis said.

The No. 3 Gryphons go on the road this Friday to take on No. 2 Elkin who advanced with a 41-13 win over seventh-seeded Andrews.