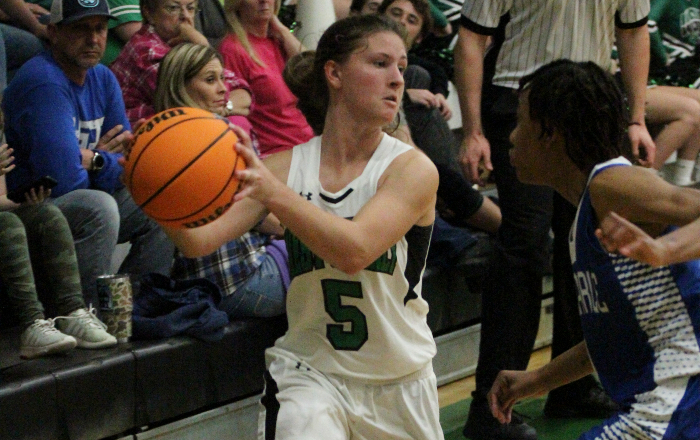 Rachel Efird looks to move the ball down low for West in the Colts' home win Tuesday over Albemarle. (Photo by Charles Curcio)

West Stanly entered Tuesday’s non-conference home game with Albemarle needing a win to go back above the .500 mark for the season. In a low-scoring game, the Colts shut down Albemarle in the third quarter en route to an 48-40 win over the Bulldogs. 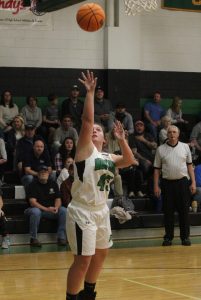 DeShada Wall, playing her first game this season for the Bulldogs (0-3), led with 17 points.

In the first half, both teams scored in different manners, with the Bulldogs getting points from the perimeter from Stanback and McLendon while 10 points each in the first half from Hughes and Mauldin put the Colts up at halftime, 25-19.

Albemarle did not score for the first four minutes of the third quarter, allowing West to build a 29-21 lead. Shada Wall’s breakaway layup ended the drought for the Bulldogs. The Colts maintained the lead until the final minute of the game.

“We knew (Albemarle) was going to be athletic, very physical, and shoot it a lot…I was happy with the defense shutting them down from the outside,” West head coach Chad Horn said.

The Bulldogs got as close as four with 1:16 on two Shada Wall free throws. Wall then hit a runner in the lane with 34.5 seconds left to pull within two. The Colts broke Albemarle’s press and found Mauldin for a layup and Kailey Furr hit two free throws after an intentional foul to ice the win.

“Ashlyn Hughes played tremendous for us tonight. She was really physical inside and went for a lot of rebounds,” Horn said.

The Colts’ coach added he was not happy with West’s offense but credited Albemarle for their efforts defensively against them.

West Stanly hosts North Stanly Monday night while Albemarle is off until Dec. 6 when the Bulldogs host North Rowan to open conference play.