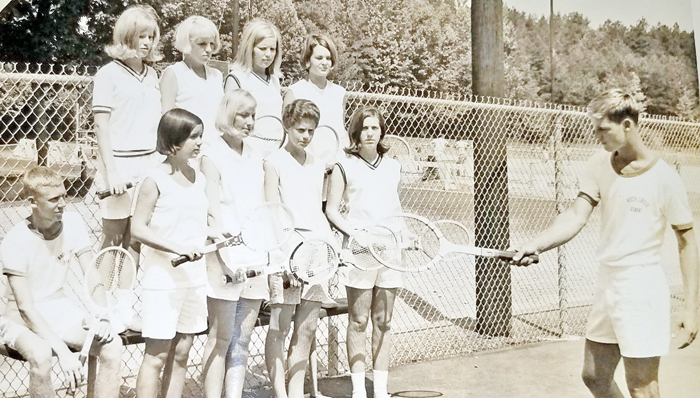 David Smith (right) will be inducted Dec. 5 as part of the Class of 2019 for Pfeiffer University's Sports Hall of Fame. (Contributed)

The Pfeiffer University Sports Hall of Fame induction class of 2019 has seven former athletes and coaches whose time wearing the uniforms of their respective teams were notable enough to earn the honor.

Inductees include former All-American basketball standouts Rico and Demario Grier along with their head coach, Dave Davis, who is the current associate head coach at Div. I Winthop.

In the case of one athlete to be honored next week at the induction ceremony, he not only excelled in his time playing sports for the Falcons but came back to work at the school both as a staff member and later as a coach.

David Smith was a standout for Pfeiffer on the tennis courts in the late 1960s. He was a three-time All-Conference selection and was twice a conference champion and All-District selection.

Smith was part of a district doubles championship in and qualified for the national tournament, both in 1968 with head coach Warren Knapp, for whom the tennis center is now named.

After his time at Pfeiffer, Smith wen on to win a number of regional and local championships through the 1970s and 1980s and at one point was ranked in the top five in North Carolina in men’s tennis.

Smith also worked at Pfeiffer from 1996-2007 as the vice president for enrollment management and either was a head or assistant coach for the tennis teams between 2007 and 2010.

Being inducted into the Hall of Fame, Smith said, was like a lifetime relationship award for his time with Pfeiffer as far as his tennis goes.

“I was playing tennis at Pfeiffer as a kid long before I enrolled,” Smith said.

“I enrolled at Pfeiffer because I wanted to play tennis.”

The program in those days was strong, Smith explained, saying his first priority was to play with a strong team but he also got a great education in the process.

After working for 26 years as a sales manager at Rexham in Charlotte, Smith retired from there where then Pfeiffer president Dr. Zane Eargle talked him into joining the school on the administration side.

“The whole experience was wonderful for me to be able to work with kids,” Smith said.

There was something about Pfeiffer which brought him back, he explained about returning to the school he loved.

Having remained lifelong friends with Coach Knapp and his teammates, Smith said being a part of a team at Pfeiffer was being in a brotherhood when you spend the large amounts of time together like they did.

“There is something about being a small school which is special. You make lifelong friends and I enjoy going back to see people again,” Smith said about the upcoming ceremony.

Smith also has been involved in the school’s alumni association in a large part because of the people.

Having a sense of community involvement also came from his time at Pfeiffer. Smith served on several Stanly boards including the Economic Development Commission, the Chamber of Commerce, Hospice and Rotary.

“(Pfeiffer) prepares you to be involved in community because it is a family.”