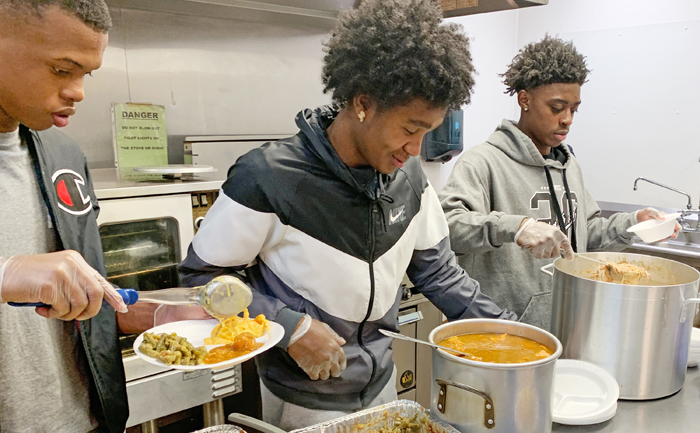 From left, Kyrean Baldwin, Camarie McNeil and Malachi Baldwin work hard in the kitchen of the Community Table giving out meals the day before Thanksgiving. (Photo by Charles Curcio)

Members of the Albemarle men’s basketball program along with the coaching staff took time after school Wednesday afternoon to help dish out Thanksgiving meals to the needy at the Community Table, a part of Stanly Community Christian Ministry.

Head coach Marc Raye, along with assistant coach Stanley Walker and players, dished out plates of holiday favorites while also visiting with people from the community.

Jennifer Frick, the director of the Community Table, said the team wanted to reach out to the community.

“It’s amazing at such a young age that they wanted to help and do what they can,” Frick said.

Volunteers at the Inn often are impacted learning compassion and understanding for those in need, she added. 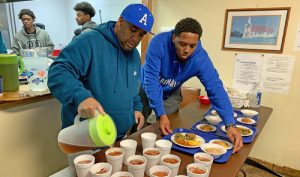 “It’s always a blessing to be a blessing,” Coach Raye said.

“It’s a great idea for these kids to see people that are young like them who still need a little help. If we can serve in any capacity then that’s what I want these guys to do.

“It’s about giving back. As a coach and a teacher, I’m serving these kids,” Raye said. “High character is what I preach every day.”

Sophomore point guard M.J. Raye said it was heartbreaking to see kids he knows from school coming in for a meal.

“They laugh and joke around with me but I never knew what was going on with them outside of school,” M.J. said.

“(Volunteering) will make us appreciate what we have more.”