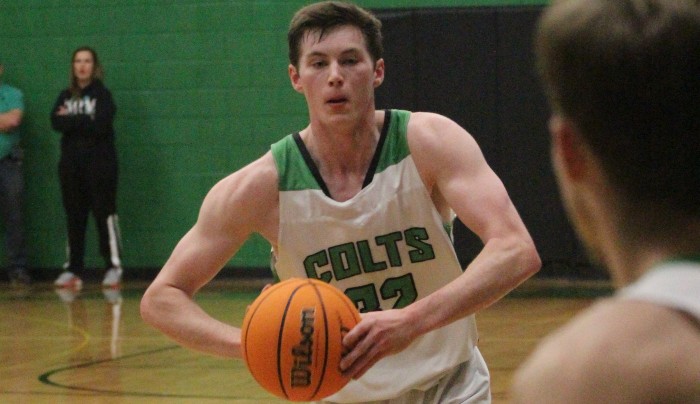 Trevor Kelly passes to a teammate in the corner in the first quarter of Monday's win over North Stanly. (Photo by Charles Curcio)

The West Stanly men’s basketball team got another big night from two juniors in a 68-46 home win Monday night over North Stanly, moving the Colts to 4-0 on the season.

Austin Medlin led West with 26 points, 20 coming in the second half, while Trevor Kelly had an explosive first half, scoring 16 of his 24 points in a second quarter where West outscored the Comets 24-4.

Kelly said most games he is not thinking about offense but is more defense-first, getting rebounds and stopping other team’s best players before scoring.

“After that, the game just comes to me,” Kelly said.

Medlin score six of his 12 made baskets in the third quarter scoring 12 of the Colts’ 16 points in the period.

“Once I started getting the team going, we were all ready and that’s when Austin started going after halftime,” Kelly said.

“(Trevor) is another guy that is in this gym every morning shooting on his own,” West head coach John Thompson said.

“He put in a ton of work in the summer and we have all the confidence in the world in him.”

Thompson also talked about the tandem effort from the two juniors.

“Austin is a closer. All he needs is a little space. I really like the way those two guys played off each other,” Thompson said.

The Colts are 4-0 for the second straight season as West gets a tough test Tuesday night against Wheatmore (2-1).

“We treat every game like it’s the same. Every team can beat us and we can beat every team,” Kelly said.