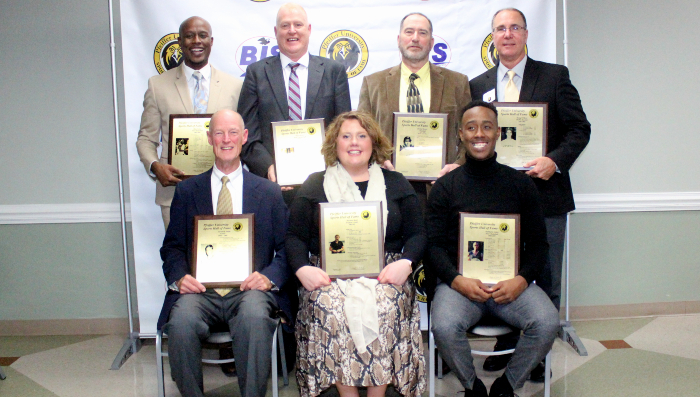 The community room on the third floor of the Stokes Student Center at Pfeiffer University was filled with laughter, tears and memories of past athletic glory at the annual Sports Hall of Fame banquet Friday night.

Six athletes and a former men’s basketball coach were inducted and shared stories from their time wearing the Pfeiffer colors.

Having started as a basketball coach at South Stanly, Davis posted a winning record in 13 of 14 seasons leading the Falcons to the Div. II Elite Eight in 2004 winning 284 games and six conference championships with Pfeiffer.

Davis said the memories of his place are immeasurable and thanked his wife, Pam, first and foremost.

“I had tremendous players here that bought into hard work on a level that is rarely, rarely seen in our game. It was so much fun,” Davis said.

Two of Davis’ fellow inductees, both of whom he  coached, still rank within the top four in career scoring for the Falcons. Brothers Demario and Rico Grier finished second and fourth in career points with 2,067 and 2013, respectively.

Davis called the Grier brothers “two of the best I’ve ever coached” telling two quick stories about both.

The former head coach said Rico once said to him, “No man has ever talked to me they way you talk to me. I had to figure out that you loved me before I could begin to listen to you.” Davis quipped it made him feel good and bad at the same time.

Regarding Demario, Davis said he was maybe the most confident basketball player he had ever coached.

“Demario joined a really good team. As a freshman, he thought he was the best player and never stopped thinking that so I had to give him a really hard time every second he played here,” Davis said.

An example of that motivation, Davis noted, was scoring 29 in the second half in an exhibition loss at UNC-Chapel Hill, who went on that year to win the national title.

“If it was a big game, he wasn’t backing down.”

Davis said Demario once said he just wanted the coach to say something nice to him.

“I wanted him to know that had a huge impact on me. I never said anything nice to you but there were many players after which I did,” Davis said to raucous laughter.

Along with a number of former Pfeiffer basketball players and assistant coaches in attendance was the school’s all-time leading scorer, Tony Smith, who scored 3,378 points in three seasons.

Rico thanked many people who helped him both during his time at Pfeiffer and helping him later in life, including another Pfeiffer Hall of Fame member, teammate Damien Argrett. The two have formed a basketball clinic business, Best of Both Worlds, and continue to coach youth basketball teams in the Lake Norman area.

The two brothers also have started a scholarship in the name of their grandfather.

Demario said he tried to be the ultimate teammate and do whatever he could to help the team. He coaches youth basketball teams along with Rico and said his main message to the players is to do the little things.

“You got to do the little things because eventually it will be a big, big thing,” Demario said.

Also crediting his wife, Demario said “you all don’t know how hard it is to deal with me,” drawing laughs from the crowd.

David Smith, a tennis standout for Pfeiffer in the late 1960s, called induction into the Hall of Fame “a lifetime association award” after having a successful tennis career while later returning to Pfeiffer to coach men’s and women’s tennis. He also served as the school’s vice president for enrollment from 1996 until 2007.

Women’s golfer Charlene Reid, who is currently a senior golf professional at Royal Portrush Golf Club in Northern Ireland, which hosted the Open Championship this year, made the long trip to Misenheimer for the ceremony.

“I had an amazing experience at Pfeiffer, one I’ll never forget,” Reid said.

Also inducted were two baseball players, Doug O’Brey, who went on to coach in college for 30 years, and Dickie Myers, who played for Coach Ferebee from 1971-75 and had 22 career wins, finishing fifth all time in Pfeiffer history, with a 2.06 lifetime earned-run average.