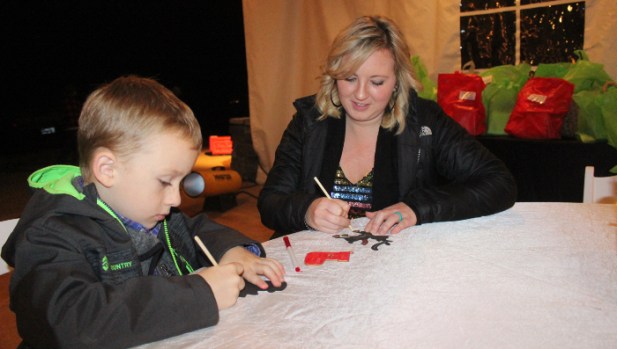 Jenna Garrison and her son, Sylas, 6, decorate ornaments for their tree at Saturday's holiday party for the 118th Squadron, hosted by the Locust VFW. (Photo by Charles Curcio) 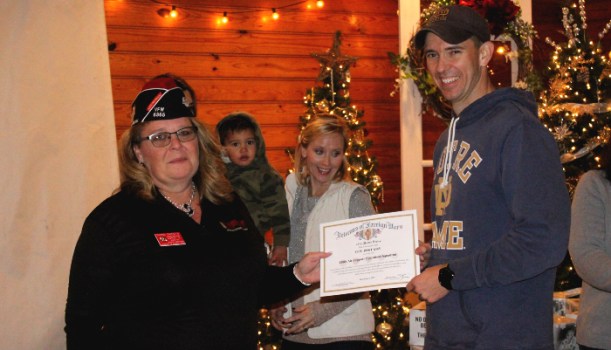 Adoptions during the holiday seasons happen frequently whether businesses come together to buy Christmas gifts for a needy family or local pet agencies find homes for their animals just in time for a youngster to find a puppy under the tree.

In the case of the 118th Air Support Operations squadron stationed in New London, the unit, many of whose members have been deployed overseas, has been adopted by the Locust Veterans of Foreign Wars post, not just for the season but in perpetuity.

As part of a VFW program where local stations are matched with military squadrons, Saturday night’s holiday party at Rocky River Vineyards in Midland helped to kick off the new relationship between the two.

Spouses and their children received a holiday meal, provided in part through a $250 donation from the Food Lion branch in Oakboro, along with boxes of food and donated gift bags from other sources.

Children enjoyed a creative moment coloring and making ornaments for their Christmas trees. Bobbi Sheets, commander of VFW Post 6365 along with being the District 12 commander, and Mike Mills from Mystical Engraving in Statesville, a Vietnam veteran, were hard at work taking pictures of children and families to put onto specially-made ornaments in the shape of dog tags.

Jeremy Mullins, chief master sergeant and squadron superintendent, said the gathering is an annual event for the unit.

“We come together and celebrate them, Mullins said. “We have a lot of guys deployed so we bring their families and kids in to make sure they are taken care of, that all their needs are met for the year.”

The sergeant said the event is meant to let families know even though their loved one is gone, they still have a family they can lean on.

While not everyone is deployed, everyone has been,” Mullins said. “So everyone here, all the spouses know what (families) are going through. “(The VFW) jumped right in and said they wanted to help. They have been awesome.”

The relationship with the Locust VFW post is one the unit came to through one of the wives who contacted Sheets regarding a unit adoption program.

“(They) wanted to know if we could adopt them just for this party. That’s not really how this works,” Sheets said noting the relationship is more long-term.

The post, Sheets said, will help the 118th with different events, but its assistance is much more day-to-day, whether it is a family with a broken-down car or one who needs a babysitter.

It’s a phone call away,” Sheets said. “Since we are more experienced…about 50 percent of our members aren’t working. We have members on a second’s notice who can pop in and help…it’s not just for this party, but for years to come.”

Sheets said members of the post have been away from loved ones during the holidays and know how tough it is. The post will now be there to help the families of the 118th get through the holidays and beyond.