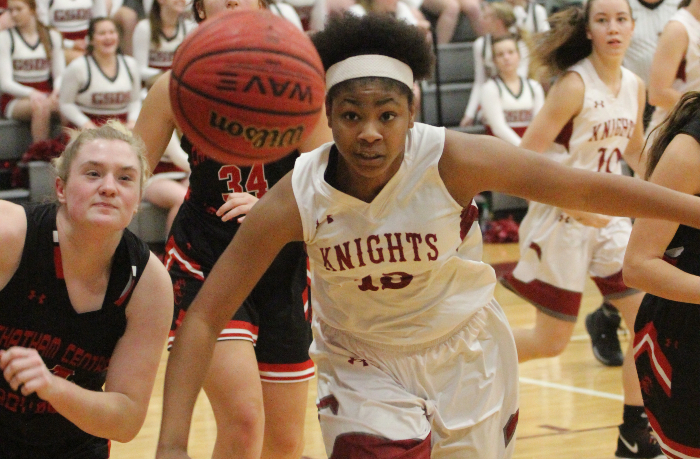 Niriah Medley goes for a loose ball in the corner in the second quarter of Gray Stone's home win Tuesday over Chatham Central. (Photo by Charles Curcio)

Having a strong inside presence in basketball forces teams to shoot more from the outside and have less chances when that presence defends the defensive glass.

The two starting forwards both had the touch from the outside, knocking down 3-pointers while also scoring down low from offensive rebounds for Gray Stone (5-0, 2-0 YVC). Ray led the Knights with 14 points while Seccora Medley added 10 points and three blocks.

The Knights never trailed the Bears (3-4, 1-1) opening with a 10-0 run including a Secorra Medley trey over the first few minutes.

When Chatham got on the board with its first bucket of the game with three minutes left in the first, it snapped a streak of more then two whole quarters since a team had scored any points against the Knights since the second quarter of the previous game against North Moore.

What impresses me the most is we are nowhere where we are going to be,” head coach Robert Stack said about coming back from Thanksgiving break then taking another long break for Christmas.

As this teams go throughout the season, if you can handle things defensively it helps with your offense.”

Stack also credited the play of starters Ray and Medley but added being able to have Niriah come off the bench and maintain the same quality of play, is a gift.

The offense from the outside can change amongst several players, Stack said, adding any girl could step up and be that person any game.

Describing herself and Secorra, Ray said they are both well-rounded players who can play the post but push the ball upcourt.

“My game is to make sure we have good ball movement and we have someone always open,” Secorra Medley said.

“We were able to move the ball quickly and efficiently.”

Gray Stone’s final game in 2019 will be Friday at South Stanly, then the Knights are off until traveling to North Rowan Jan. 7.