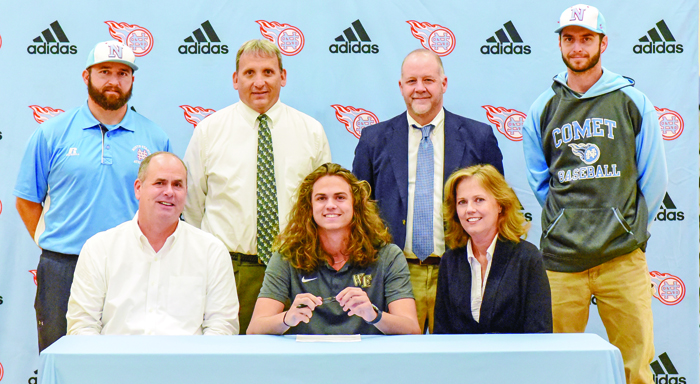 The college recruiting process for high school athletes wanting to play at the Div. I level often leaves athletes with a difficult decision to make about which program will be the best fit.

In the case of Rhett Lowder, an standout pitcher with the North Stanly baseball squad, his choice was a lock for him. During the recent signing period, Lowder chose to play next year at Wake Forest.

“I have been locked in on Wake Forest for a while now, even before I committed there. I knew that is where I wanted to be,” Lowder said.

“Out of all the schools I received offers from and toured, Wake just stood out to me. I always knew that I wanted to go somewhere that if baseball didn’t work out I would still be at a place where I could be successful.”

Lowder said the atmosphere on the campus and competing in the Atlantic Coast Conference was on a different level.

The Comet right-hander went 9-0 last season with a 0.61 earned-run average striking out 115 batters to seven walks,

Signing before his senior season in the spring was important, Lowder said.

“I just knew that Wake was where I wanted to be so I decided to sign early,” Lowder said.

The future Demon Deacon said many have had an influence on his his baseball career, from his family driving him across the county to play in tournaments to coaches like North’s Will Davis and travel ball coach Don Hutchins.

After high school, Lowder said his immediate goal is to help Wake win while developing as a player.

Long-term, he said he wants to be drafted by a Major League Baseball team which he felt like is a possible goal if he puts the work in.

“My goal in the classroom, as of now, is to get a business degree… I feel good about the academic resume Wake Forest has so it gives me confidence that if baseball doesn’t work out I will still be okay in the real world.”