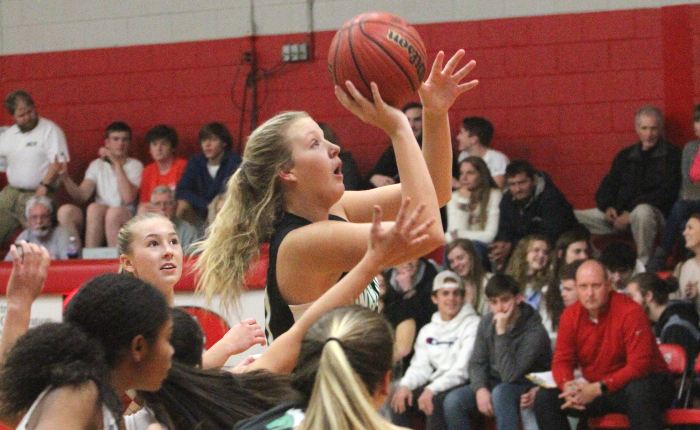 Maryn Mauldin goes for a runner in the lane in the second quarter of Thursday's win at South Stanly. (Photo by Charles Curcio)

West Stanly got back over the .500 win percentage mark Thursday night with an 45-33 non-conference win at South Stanly.

Kalea LeGrande was top scorer for the Bulls (0-6) with 13 points.

Kailey Furr was clutch for the Colts in the third quarter knocking down a pair of 3-pointers two times the Bulls got within four points.

“I just know that whenever I’m open I’m confident in my shot,” Furr said. “If I have it, I’m going to take it.”

“This team has a ton of ability to hit the outside shot and they’re confident,” West Stanly head coach Chad Horn said.

“I was glad to see us take some shots. We missed some of them but that’s how the ball rolls sometimes.”

The win over the Bulls was meaningful, Furr said, because of the players being fiends and rivals.

West led the majority of the game. South had chances in the final four minutes to close the gap but could not not score, missing free throws.