Battle of young teams goes to North Stanly over Albemarle 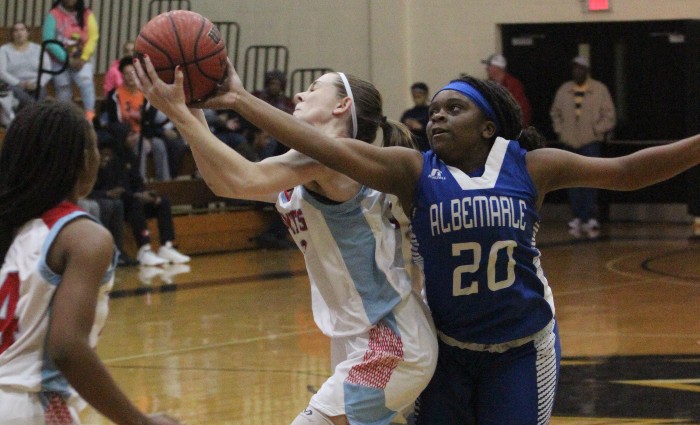 Mary Beth Bowers and Kadajah Little battle for a loose ball in the paint in Friday's game at Pfeiffer University. (Photo by Charles Curcio/staff)

A low-scoring affair Friday night at Pfeiffer’s Merner Gym saw North Stanly see a sizable lead dwindle to one late in the third before a big run put the Comets up for good in a 54-win for the Comets.

The Bulldogs trailed 31-19 at halftime but caught fire in the third, pulling to within one point in the final 30 seconds, 41-40.

North head coach Greg Speight called a timeout which Goode said gave the team a break to get their minds set right.

Speight added he told his team in the timeout in the third quarter to not rush and take their time.

She responded with a 3-pointer from the left corner with seconds left gave North momentum. The Comets then went on a 10-0 run over the first 90 seconds of the fourth quarter to put the game out of reach.

“I just do it. I do what I have to do,” Goode said about her efforts in the game.

“It’s a young team. Sometimes I don’t have any idea what we might get,” Speight said. This season North has just two players on its roster which are upperclassmen: senior Payton Landis at guard and junior reserve forward Syrai Jackson.

“We started making some baskets…every win is a good win,” Speight said.

“I think we can keep winning. (The win) boosted our confidence,” Goode said.