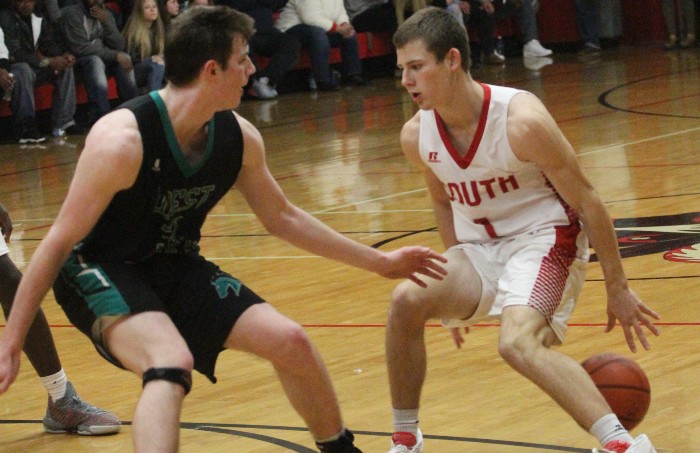 South Stanly's Justin Gaddy dribbles behind his back in the Bulls' home win Tuesday over West Stanly. (Photo by Charles Curcio)

The last time a South Stanly men’s basketball team had beaten West Stanly was Dec. 2, 2014 when the Colts lost at South.

With Thursday’s 75-69 home win, the Bulls ended an eight-game losing streak to West while ending the Colts’ six-game win streak and giving West its first loss of the season.

“We made shots tonight. Our offense had been good for the last five ball games,” South head coach Sean Whitley said.

Jaquez Cooke had a triple-double for South (3-3) with 19 points, 11 rebounds and 10 assists while Justin Gaddy led the Bulls with 25 points, knocking down five 3-pointers. South also got 11 points off the bench from Brandon Teller.

“I’ve preaching to the guys to keep shooting the shots we are shooting. Tonight, we started making them.”

Whitley also praised the play of Cooke at point guard, saying he does a good job distributing the ball keeping the players in rhythm.

Austin Medlin led West (6-1) with 18 points while Jake Bartell added 17 points including 9-of-12 at the foul line. Brack Morgan reached double figures with 12 points. Tayshawn Haygood added 11 points off the bench for the Colts.

Whitley said Cooke’s job was to matchup with West’s leading scorer, Medlin, whom the coach said he did not have to tell Cooke who he was guarding beforehand.

“Austin is a great basketball player…he is definitely tough to stop. We knew our job was to get him frustrated and not give him open looks. Quez takes a challenge like that,” Whitley said.

Cooke also said he trusted his teammates’ ability to knock down shots as he tries to get the ball to them.

Gaddy’s efforts on the offensive end have come from him stepping into a more expanded role, he explained.

“I knew this year I had to step up more with some of the pieces we lost last year. I accepted the challenge and I work hard every day,” Gaddy said.

Gaddy also said his team loves the county games, especially earning bragging rights around the county with a win.

“(Gaddy) has become a true triple-threat guy,” Whitley said. “He can get to the basket and attack, puts pressure on the defense. They can’t leave him.”

West jumped out to a 7-2 lead but the Bulls rallied. A four-point play from Gaddy with 2:04 left in the opening period gave South a lead the team never relinquished.

The closest the Colts got was within two points in the waning seconds of the first half but a Duncan McSwain 3-pointer at the buzzer put the Bulls up by five, 40-35.

South survived a third-quarter surge from the Colts as well as Gaddy’s trey at the buzzer put South up double digits, 63-52.

Both teams play at home Friday night as South hosts Gray Stone for a conference game while West takes on Jay M. Robinson.