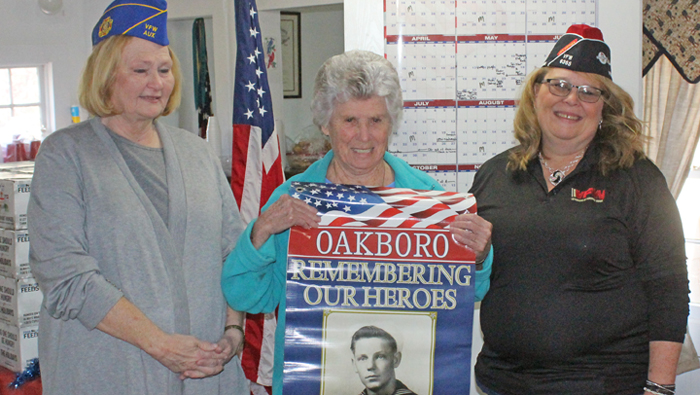 As part of its remembrance of Pearl Harbor Day, the Veterans of Foreign Wars Post in Locust hosted a VFW motorcycle riding club for lunch as well as made a special presentation to a member of the Locust Auxiliary.

Jeff Hartsell, a VFW rider from Rowan County, said the VFW riders group which was just founded is one of the few groups of its kind in North Carolina. The ride also coincided with the Locust post’s Toys for Tots drive, which the group helped to deliver.

“We had members who wanted to do something for Pearl Harbor Remembrance Day. We thought we could do it all at one time,” Hartsell said.

“A group of us wanted to start (a motorcycle club) and there were none around here…our mission is to assist and help out with VFW and veteran programs.”

Bobbi Sheets, commander of VFW Post 6365, presented a flag to Betty Hartsell, widow of WWII veteran Fetzer Hartsell, in a ceremony conducted before riders left to deliver the toys.

“Fetzer was a charter member of this post. It was very important (to honor him),” Sheets said.

“I’m a firm believer that you replace a sad event with a happy event. I think she’ll remember this as happy,” Sheets said.

The post commander also said Pearl Harbor Day should not be forgotten because of the number of soldiers who died on that day.

“We also need to remember a lot of our WWII veterans came home with scars,” she said. “There are very few of them left. We have to keep them close and remember them.”