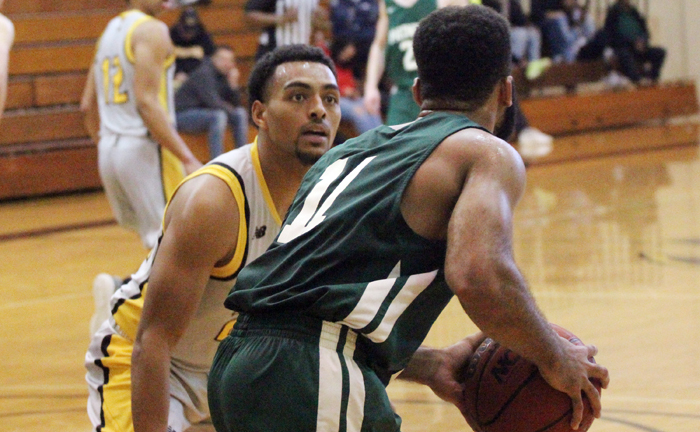 Listed on the roster at 5-foot, 11-inches tall and 190 pounds, former West Stanly standout Taylan Rowe is the kind of basketball player made for the uptempo offense at Pfeiffer University.

In his second season with the Falcons, Rowe’s numbers continue to climb. Entering Wednesday’s home game with rival Piedmont, Rowe played an average of 11.6 minutes per game having already played 109 minutes in nine games compared to 1803 in 21 games last season.

His points per game average has increased as well this season including reaching double figures three times. Rowe’s season high was 20 points in a loss to Emory 18 points scored in an exhibition game with Div. II Young Harris. He also netted 15 points when the Falcons lost to Div. I Winthrop.

Starting at Stanly Community College for one semester, Rowe transferred to Pfeiffer in the spring and was just playing pick-up basketball games around campus with guys on the team.

“I would wake up in the morning and go an shoot,” Rowe said.

He got a opportunity to try out in the fall of the year to earn a walk-on spot for the Falcons, which he got.

“After my first year, I got acclimated to being on campus,” Rowe said.

One of the biggest challenges Rowe faced was getting in game shape, especially having a year off after playing in high school.

“I was very heavy…I was playing basketball but it wasn’t routine or every day,” Rowe said.

As he played on the team, his numbers and shooting started to increase, but this season as a sophomore, Rowe said he has taken a big step forward.

“Taylan is the kind of kid that’s going to be a captain. He’s going to have a great career here,” Pfeiffer head coach Pete Schoch said.

“Basically, he is the only guy we did not know about on campus.”

Schoch said Rowe just sort of showed up on the team’s radar but having coached him for two seasons now he enjoys interacting with the former Colt.

“I don’t think we could ask for a better guy. We don’t have a more hard-working guy…you kind of feel like you hit a mini-lottery. Even at the Division III level, that really doesn’t happen,” Schoch said.

The uptempo nature of Pfeiffer basketball on both sides, with a team averaging 93.1 points per game this season who plays a trapping offense the majority of the time, takes time to adjust to physically, Rowe said.

“How we play the games is exactly how we practice…(practice) is not a day off,” Rowe said.

Schoch said Rowe is his own toughest critic, saying he beats himself up so badly he could almost work himself into a rut.

“He was a guy who could shoot the basketball reasonably well when open but he’s worked himself into a player who has real range and a quick release, but he is also an asset in terms of playmaking. He can put it on the ground and see open teammates,” Schoch said.

Rowe also has become a leader on campus as a resident assistant and a student ambassador, the latter being a position where he leads prospective students on tours of the campus.

Academics have always been at the forefront for Rowe, who was not recruited coming out of West because of a injury which kept him from earning All-Conference honors his seniors season as he head the year before.

He changed majors in his sophomore year from a nursing degree to health and exercise science, which he could use in the future to work as an athletic trainer or in occupational health.

“I took a step back and thought about things from a bigger perspective,” Rowe said about changing majors.

Pfeiffer’s head coach said Taylan is the kind of person who can relate to anyone.

“You just can’t not like the guy. He is hilarious. He knows exactly what buttons to push on a 41-year old basketball coach or he can hang out with an 18-year old kid from Florida. He’s very astute and smart,” Schoch said.

Rowe said he would advise any student wanting to play at the next level taking care of the academic side is 100 percent the first thing they should do.