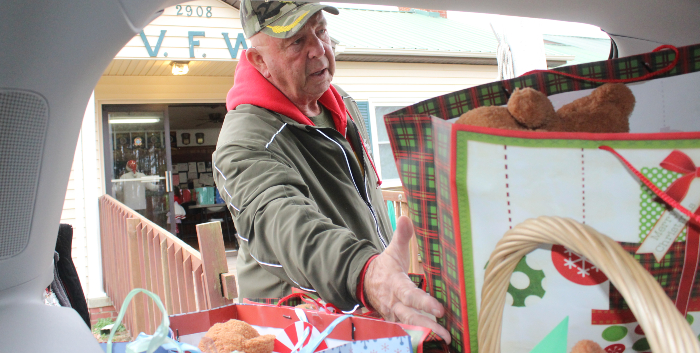 Reaching out to veterans in need has been one of the missions of the Veterans of Foreign Wars, especially around the holiday season for those who are shut in or living in facilities. 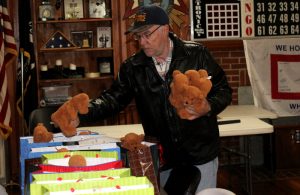 On Saturday, members of VFW Post 2908 in Albemarle and the Post’s Auxiliary delivered Christmas gift bags to veterans in nursing homes and shut-ins.

A donation from the Oakboro branch of Food Lion provided boxes of food to give out to vets as well.

Paul Hummel, commandant of the Stanly County Marine Corps League and VFW commander, said the program for giving Christmas gifts to vets has happened the past four years.

Hummel said the number of gift bags grew this year to 60 after starting with 30 four years ago. The overall budget for the gifts is around $1,000 funded by the VFW post.

“Everybody gets sentimental around Christmas,” Hummel said. “Most who were veterans have experienced this time of year away from their families. Being in the military, you’re probably in a war zone sometimes. You’re stationed in various locations around the world and you get that sentimental feeling.”

Beyond just delivering gifts, Hummel said visiting the veterans and sharing their feelings makes the vets smile and feel appreciated.

Having received a few packages in his military career overseas, Hummel said they were meaningful.

“They make you sit back and think that there is someone out there that cares about you. You have to continue your efforts to get your butts home again,” Hummel said.

Kathyrn Hinkle Russell, with the Auxiliary, said the shopping for the items and packing took a lot of time.

Regarding the gift program, Russell talked about how much it means to her and to the veterans.

“I don’t think I could ever do enough or say enough to repay a veteran for the sacrifices they have made,” she said. “Especially in the nursing homes, a lot of those guys don’t have friends or family who come visit often…it’s important for them to know they are appreciated, loved and cared for.”

Programs like the Christmas gifts, she added, help show the VFW’s efforts to reach out to the community.

“I think my generation and the generation coming up…are not nearly as involved as they should be,” Russell said.

She said more veterans her age and younger need to get involved with organizations like the VFW.

She added many of her friends who served suffer from things like post-traumatic stress disorder and depression.

“I try to help them understand, if you get out here and help people going through the same things you do, it’s going to help you.”