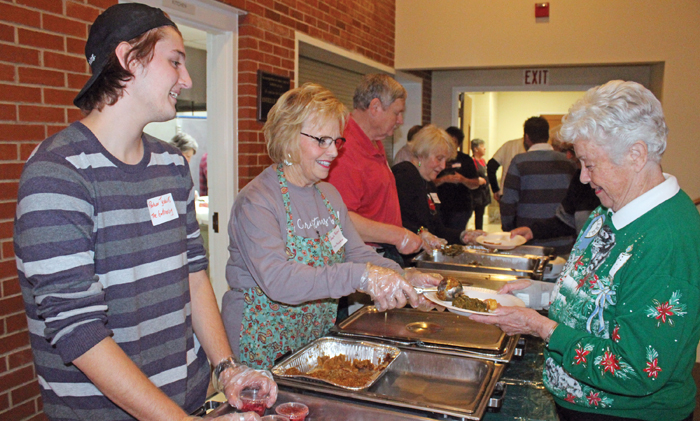 People from all walks of life, representing a number of churches, gathered in the fellowship hall of First Baptist Church in Albemarle Christmas Day for the 30th annual Community Christmas Dinner.

(Note: For a gallery of photos from the dinner, see the following link: https://photos.thesnaponline.com/2019-Community-Christmas-Dinner/ )

A meal of ham, green beans, sweet potato casserole, cranberry sauce was served along with large trays of clown cookies and other sweet specialties from the Albemarle Sweet Shop.

In all, 137 volunteers prepared meals for a steady stream of community members along with preparing some meals to go for nursing homes and other facilities along with shut-ins.

Jane Myers, a member of First Baptist, said the goal this year was to have more people dine in rather then get plates to go.

“A lot of people get carry out and we want to meet that need but we wanted people to come in and fellowship,” Myers said.

“(We are) feeding the body and the spirit…it’s the day to celebrate Jesus’ birth but not be alone, to put a face on being a Christian.”

Myers also said of the numerous volunteers, who helped in the days prior to the event as well as Christmas Day, represented many different denominations.

“The denomination doesn’t matter. We’re all part of a family,” Myers said.

Rev. Ryan Clore, head pastor at First Baptist, said the community dinner is what Christmas is all about, adding it’s an awesome opportunity to be God’s Church on Christmas Day.

“All these churches have come together to make this successful, to say to people, ‘Let’s come together and be a community,’” Clore said.

Among the volunteers, Clore said, was Sidney Weber, from Christ Episcopal Church, who was greeting every person who came in for lunch with a hug.

Clore said Weber told him a story about last year’s event where she had given someone a hug who immediately told her they did not have anyone to hug.

“What a opportunity this is to share. You don’t know if people have a ton of family or no family. It’s just so good to connect.”