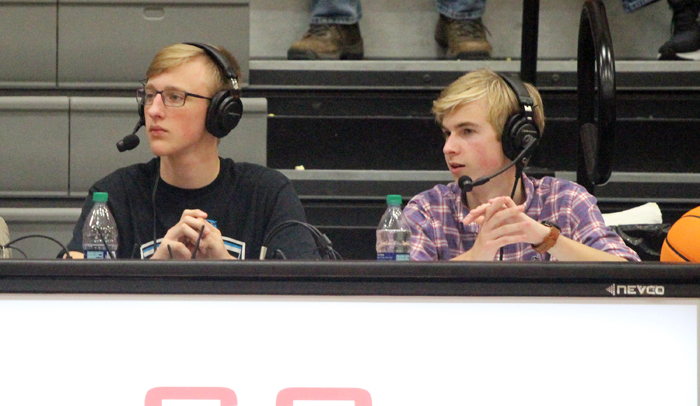 With the growth of new technology allowing sports to be streamed worldwide on the Internet, high schools in North Carolina have joined the trend.

Gray Stone Day, having added a camera in Singletary Gym several years ago allowing fans to watch the game while enjoying, concessions in the lunch area, recently kicked off a new basketball broadcast.

As part of the National Federation of High School’s online broadcasting network, Gray Stone students as part of a sports marketing class will get the opportunity to broadcast more games.

The Knight have been providing games online in volleyball season but with sounds of the games as the only audio to accompany the video.

In the case of Gray Stone’s recent varsity doubleheader against Chatham Central, two students, Grayson Jones and Spencer Chandler provided play-by-play and color commentary for the games between the Knights and Bears.

For Jones, speaking to an audience was a step outside of his comfort zone.

“I was a little excited because I really enjoy basketball, and I was eager to talk about a game that I love on a platform like that. So, really, it was a mix of emotions,” Jones said.

Jones and his fellow group members as part of the marketing class were tasked with figuring out the technological needs for a live streaming sportscast.

Knights athletic director Jeff Morris, who teaches the class, helped the students get the necessary equipment.

“Our goal for this semester was to get the tech set up and test it so it would sync with the NHFS Network,” Morris said.

“Now that we have that working, we will build some interest and give students exposure to live broadcasting. This is an industry in which our students have expressed an interest and we are taking baby steps to make this available to them.”

A practice run-through at a game a week before offline was really helpful, Jones said.

“It helped me become more comfortable with hearing myself and my co-commentator through the headset. It also helped me get a feel for the rhythm you need to speak in for the broadcast,” Jones said.

He added he was nervous about any missteps because it was live but said in the future both he and Chandler would work on better pacing and being more exciting.

“When I was first asked to do the broadcast I was extremely excited. I have done podcasting in the past so I wasn’t as nervous,” Chandler said.

“I had never done it live though so I was slightly nervous knowing that there was no editing things out if I messed up. I knew, though, that Grayson and I both knew basketball well and we work well together so that made things easier.”

Chandler added he did not do much to prepare for broadcasting the game except to refresh himself on the duties of a color commentator.

Hosting two podcasts also helped him to broadcast the game.

“I have become used to speaking into a microphone without being about to see who I am talking to. This was more like a podcast than I thought it would be,” Chandler said.

“I think Grayson and I both did well. I would hope that we could continue doing this and that maybe we could even expand the broadcast to other sports in the future.”

Jones said in the future the group hopes to be able to display the score on the broadcast as well as getting the word out about the broadcast to grow the fan base online.