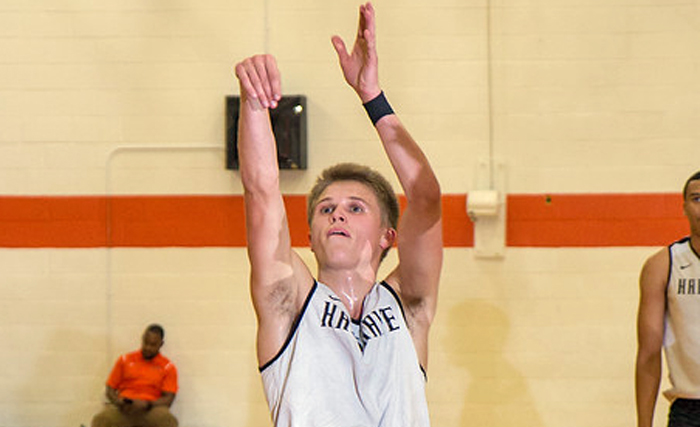 Bryson Childress shoots a free throw for Hargrave Academy, where he averages 14.5 points per game for the Tigers. (Contributed)

One former outstanding basketball player for North Stanly saw his recruiting status continue to improve as his team’s schedule brings him back to play closer to home.

Childress, playing post-graduate basketball this season for Hargrave Military Academy, said it means a lot to him that Coach Tubby Smith believes in him enough to offer him a scholarship

“He’s one of the best coaches in college basketball. It’s a prestigious school and a great basketball culture,” Childress said regarding Smith, who has coached for 28 years including winning a national title with Kentucky in 1998.

The schedule for the Tigers will bring Childress and his teammates to Greensboro Jan. 13 to play Liberty Heights as well as a matchup with Guilford College two nights later.

Hargrave was recently ranked as the number-one team in the National Prep Coaches Poll. The Tigers are 15-0 on the season including wins over ranked opponents such as Woodstock Academy and New Hampton.

Individually, Childress continues to put the ball in the basket as he did when score more than 2,000 points for North Stanly. With Hargrave, he has averaged 14.5 points per game and is shooting 52 percent from the 3-point arc.

Childress said playing for the Tigers has been great as the team climbed to the top of the coaches poll.

“I’ve really grown and developed as a player and person. I’m playing against the best players in the country every day and it’s really prepared me for the college level physically and mentally,” Childress said.