Norwood park will be transformed for third annual Winter Wonderland 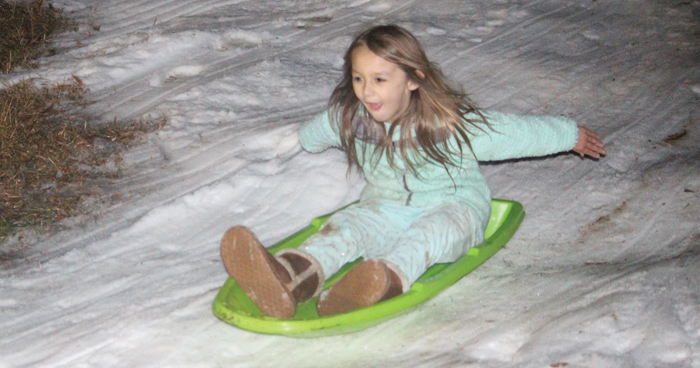 Isabella Jones enjoys going down the kiddie slide at the second annual Winter Wonderland in Norwood in 2019. The kiddie slide was an addition this year, along with music, hay rides and food. (File Photo)

Plans to again turn Darrell Almond Park in Norwood into a wintry festival were discussed at Monday’s meeting of the town’s council.

Police Chief James Wilson spoke before the council to report on the progress of the town’s upcoming third annual Winter Wonderland, scheduled for 6 p.m. to 10 p.m. Feb. 15.

The big feature of the festival, as it has been the last two years, will be a snowy hill for young and old to sled down along, with a smaller slide for younger kids.

Last year’s slope, Wilson said, took 1,400 20-pound bags of ice sent through a wood chipper to create the slides. Because of the amount of ice needed, Wilson said the ice was chipped up for free due to the money spent on the ice.

Mayor Harold Thompson said the festival generates so much traffic for the town, but he hoped the weather would be colder for it.

The money was already built into the current budget, so no vote was needed.