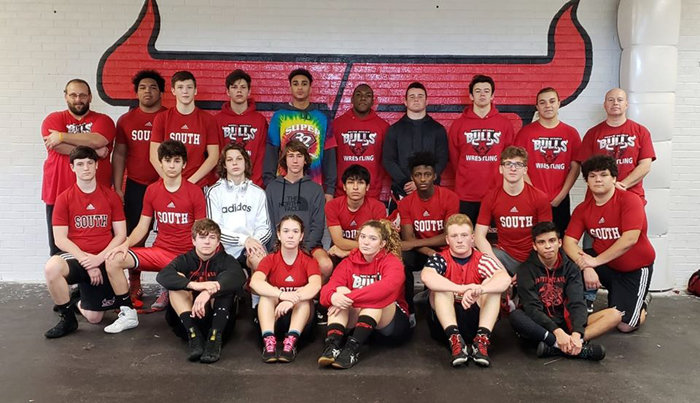 As the wrestling program has done for a number of years, South Stanly staged a double duals event Saturday hosting the three county programs for the county duals along with hosting Jay M. Robinson, Parkwood, Trinity and Union Academy for the annual Bull Pen Duals.

The Rebel Bulls first came away with the county championship for the third time in four seasons posting wins over Albemarle 60-24, North Stanly 70-12 and finally rival West Stanly, 45-30.

Albemarle’s Adrian Little, who earned Most Valuable Wrestler honors for the county event, got the first of his victories at 195 pounds with a win over South’s Lawson Hicks.

The Bulldogs also got a pinfall win from Ricardo Bustos at 120 pounds.

North had pinfall wins against South from Xob Lee at 120 and Meliek Bryant (160).

In the closest event, South topped the Colts by 15 points by jumping out to a 15-0 lead with a pinfall win from Ramirez at 113, a forfeit and a 4-2 decision for Caraway at 126 pounds over Bryson Whitley.

West won the next three matches getting a 19-4 technical fall from Aidan Hiott at 132 pounds, a pinfall win from Joseph Frey and a 14-1 majority decision won by Korbin McNeill at 145.

South won the next three matches including Trent Drake winning by pinfall at 145. Two late forfeit wins gave the Bulls the victory.

The Colts took second place in the county event posting a 39-21 win over Albemarle and topping the Comets 59-6.

Head-to-head, Albemarle got a 42-30 win over North Stanly.

Parkwood High School won all five of its matchups, including a 37-36 win over Trinity and a 48-33 victory against Robinson to win the Bull Pen Duals.