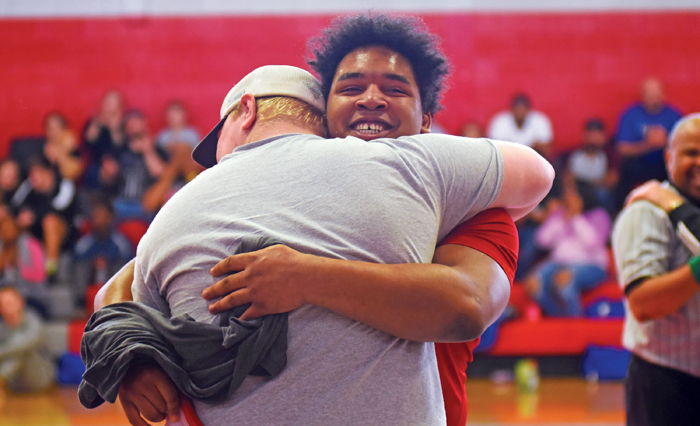 He has wrestled for the South Stanly Rebel Bulls since his freshman season, steadily moving up through the larger weight divisions.

Mayo earned his 100th victory in the team’s matchup with Albemarle when he pinned Unique Carvalho wrestling in the heavyweight division.

Reaching 100 wins was not a sure thing, Mayo said, noting he had a knee and ankle injury while playing football his junior season.

A three-sport athlete who spends the spring season on the track team, Mayo said not playing football helped him to stay healthier last year and this season as well. On the track team, Mayo actually did long jump and triple jump for his first two seasons while also throwing the shot put and discus.

His senior year on the mat has been successful. Through Wednesday’s matches versus South Davidson and West Davidson, the 270-pound senior was 30-1 overall. His only loss came on a disqualification against Cox Mill when he took down his opponent, Jeff Meendering, and injured him.

Mayo has pinned 20 opponents this season with only one match, an 8-3 win over Trinity’s Solomon Badgett, going the distance.

“(Playing multiple sports) helped my overall athleticism. If I had only wrestled, I wouldn’t be as athletic as I am now,” Mayo said.

Being more athletic has helped him as a wrestler, Mayo said, especially this season when he moved up to the heavyweight division.

The senior said he does not see himself as a wrestler who relies on technique, like teammates Hunter Barrier and Trent Drake, but he added he is familiar with some technical wrestling.

Mayo steadily moved up the weight divisions, starting at 170 pounds his freshman year but moving up the next season to 195 then wrestling at 220 reaching the state tournament in Greensboro. He weight around 185 pounds and was going up against light heavyweights who outweighed him by 40 pounds or more.

South co-head coach Michael Curlee said Mayo learned a lot wrestling up in weight at 220 pounds when his teammate, Cade Whitley, was injured.

Curlee added Mayo is a tough kid and added he has confidence his senior heavyweight will always give 100 percent on the mat.

This season, Mayo said his athleticism helped him be successful against guys who were near to his size but maybe did not have his quickness.

“Most of the time they can’t move like I can. They don’t shoot. That’s one of my biggest strengths,” Mayo said.

Wrestling, along with track, is more of an individual athlete’s efforts along with a team event, which Mayo said he likes better than team sports.

“Even if your team loses, you can win your match individually. I like it because it can still build teamwork and leaderships qualities like any other sport,” Mayo said.

With his time on the team, Mayo said he has tried to help push his teammates in practice to get better, getting on to anyone goofing off but being a leader for the freshman.

Mayo credits Coach Curlee for his influence over the years saying he has been passionate and taught him work ethic.

“He can go from joking around to serious so quickly. I love that about him,” Mayo said.

Curlee said Mayo has grown substantially in size over his four years and has a lot of athleticism for a big guy.

“He’s very talented,” Curlee said adding he listens and is coachable. The two had to develop a rapport Mayo’s freshman year because he transferred in from West Stanly Middle, so Curlee had not coached him as he has many of the high school wrestlers.

“It was a little rocky (to start) but at the end of the freshman year, he was like one of my own. As soon as he and I gelled together, he just blossomed,” Curlee said.

Mayo’s goal for the season is nothing less then winning a state championship, which his coach believes he can acomplish.

“It is really up to Khris,” the South coach said, adding the only thing which can stop his senior heavyweight from winning a title is Mayo himself.