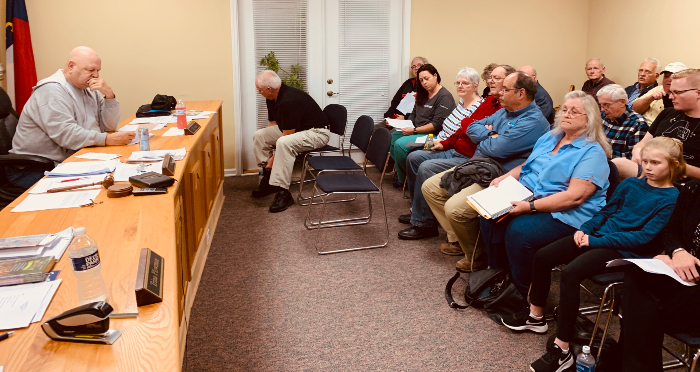 In front of a packed Red Cross Town Hall Monday night, the town’s council denied a zoning request for land located on North Oak Ridge Road near the junction of Jacob and Ridgecrest roads.

Rebecca Dry, the owner of the 6.46 acre parcel, was seeking permission from the council to rezone the land from residential agricultural to R-8, which includes multi-family homes like townhouses.

Michael Sandy, a contract consultant for the town, presented the request, which was previously approved unanimously by the county’s zoning board, at a public hearing before the town’s regular meeting.

Dry said she and her family did not have any options to stay in Ridgecrest or Red Cross and the family recently moved to Richfield. She said change to the area adding developments like she proposed were inevitable and her plans were more in line with the 2010 Stanly County land use plan.

Eight residents voiced their disapproval of the change citing reasons like increased traffic, noise and more transient families who may not choose to stay long-term.

Regarding traffic, Linda Thompson, a 50-year resident of the area, said most cars barely slow down in the area at the stop sign on Jacob Road.

Several residents said they did not have a problem with single-family homes being constructed on the plot but not multi-family structures.

Another resident who spoke against the zoning change was Stanly County Board of Education Chairman Melvin Poole. A Jacob Road resident, he told the council they do not have to do what the county’s zoning board recommends.

Board member J.J. Curlee moved to reject the request and it was seconded by Trina Plowman, who in the board comments section of the regular meeting expressed being against the change. The motion was granted and the requested change was denied.

Sandy said the land use plan, which is 10 years old, will be going through changes soon. He asked members of the community in attendance to be more involved in the process by attending future land use planning meetings.

“If you want to keep it a certain way, the plan is where you need to be,” Sandy said.

After the meeting, Dry said since the town council spent time and tax dollars on the land use plan, she hoped future development requests would keep in touch with that plan.

“If (the 2010 plan) is not upheld, (officials) should come up with a new plan to see which direction growth will go,” Dry said.