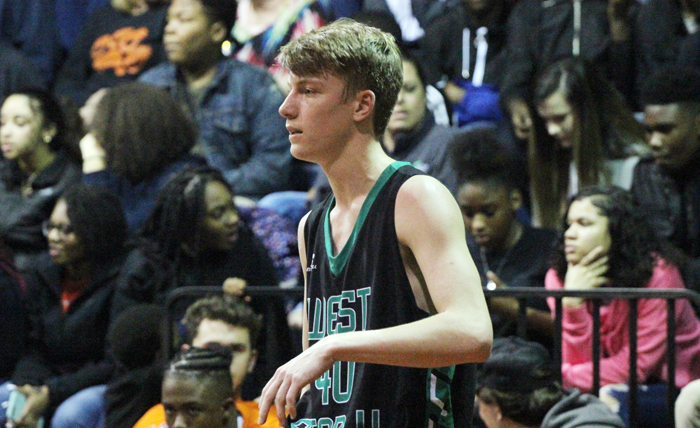 West Stanly junior Austin Medlin has been scoring points at a strong clip all season long slowly approaching a benchmark scoring stat in high school basketball, with the chance coming Friday at Anson County to score his 1,000th career point in high school.

In the middle of the third quarter, Medlin broke through to become the school’s eighth all-time men’s basketball player with 1,000 or more points.

“I’m really excited about (scoring 1,000 points). I worked really hard in the offseason the past couple of years,” Medlin said.

More of a perimeter shooter last season with the team having a quality center in Hayden Greene, Medlin has shouldered more of the scoring burden with Greene’s having moved on to play at Guilford College.

“I developed my shot a little bit more and I have been working on some moves to get to the basket and then finish or shoot free throws,” Medlin said. 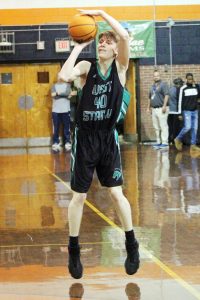 Austin Medlin fires a jumper in Friday’s game for the Colts. (Photo by Charles Curcio)

“I’m happy for Austin and proud of him for the hard work he has done to get to this milestone,” West head coach John Thompson said.

“He puts in a lot of time in the offseason and during the season on his own and it is paying off.”

The accomplishment for Medlin came in what proved to be a difficult close loss for the Colts, 63-62, to the Bearcats (7-6, 3-1 RRC). Twice in the game, West overcame a double-digit deficit in the first and third quarters but came up short at the end.

Post player Ethan Conner had a big night for West (10-6, 2-2) with 23 points and eight rebounds while Trevor Kelly, whose 3-point attempt with seconds left in the game came up just short, added 17 points. Medlin had 12 points in the win adding four assists and two blocked shots.

“We can take a punch and get backup and fight. That’s really the main thing I don’t think we did earlier in the season that we’re doing now. (We are) a lot more physical and a lot stronger,” Medlin said.

“We can’t dig a hole like that in the first quarter against an athletic team in a conference game on the road,” Thompson said regarding the game.

“(Anson) finished around the basket a couple of times where we did not.”

The Colts have a non-conference game Wednesday at Gray Stone.