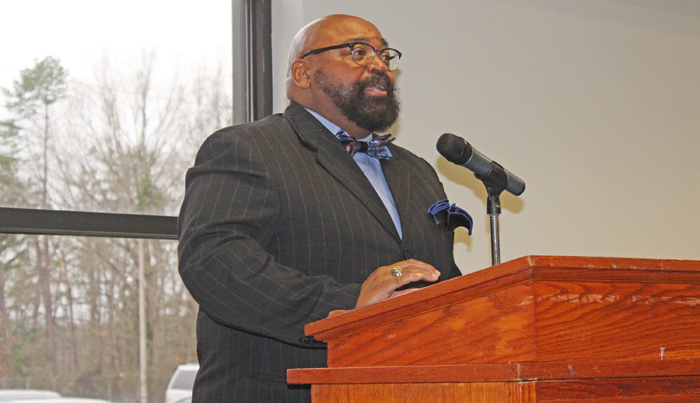 Rev. Darryl Medley delivered a version of the "How Long, Not Long" speech given originally by Dr. Martin Luther King Jr. after the Selma march in 1965. (Photo by Charles Curcio)

Hosted by the Stanly branch of the NAACP, keynote address speaker Rev. Darryl Medley from Spirit and Truth United Church of Worship in Albemarle inspired a packed banquet room with words from King.

The speech Medley referenced came from King on the steps of the Alabama state capitol in Montgomery. It’s known as “How Long, Not Long” after the completion of the March 25, 1965 Selma to Montgomery march.

Medley delivered the King speech inserting the words Albemarle, Stanly County and North Carolina where the original speech referred to Montgomery or Alabama.

At the end of the speech, which cites “The Battle Hymn of the Republic,” Medley’s booming voice filled the room with the words, “Glory! Hallelujah!” and the phrase “Our God is marching on!” ending with “His truth is marching on,” which was answered by the capacity crowd with a standing ovation.

Prayers were also offered by the Rev. Diedre McBride for the community. A benediction from Minster Tym D. Scott, president of the Stanly chapter of the NAACP, asked the community to dream big and dream as one.

“When we unite together as one, we can do much as one than we can when we are single,” Scott said.

He added people should not be judged by the color of their skin, but the content of their character.

Stanly County Board of Commissioners Chairman Matthew Swain greeted the community members, urging them to attend the government’s public meetings to speak during public comment sessions and be involved with local government.

Albemarle City Councilman Dexter Townsend said after the program he hoped the message resonated with those in attendance.

“I hope we can take this message back and implement it in our daily lives. It’s so important that we move forward as a community with the core values Dr. King stood for,” Townsend said.

With attendance numbers continuing to grow for the breakfast, Townsend said the event is important and is called the Unity Prayer Breakfast because it is something Stanly County needs.

“This is one of very few events I’m aware of in Stanly that such a diverse group of business, political and religious leaders come together for a common cause, for the greater community, ” Townsend said.

Scott said events like the breakfast are the kind King wanted to unite people as one regardless of race, creed, color or anything else.

He said the spirit of unity should be every day and not just days like King’s birthday.

“Every day is a day we should be gathered as one. Every day should be that day with equality and freedom.”