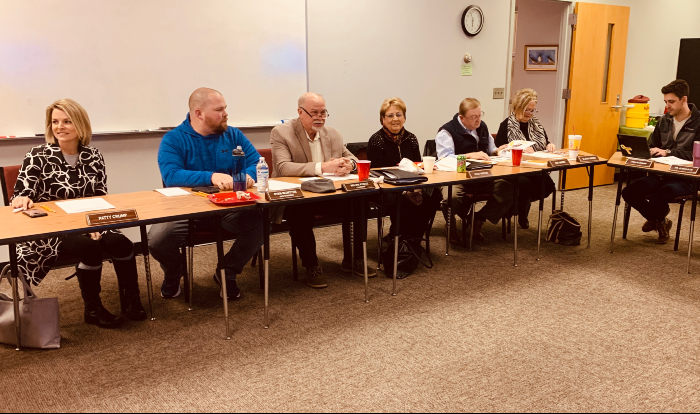 At Tuesday’s work session of the Stanly County Board of Education, board members and Stanly County Schools staff discussed a wide range of issues facing the school system.

Among the items on the agenda was a potential new calendar for the 2021-22 school year. Assistant Superintendent of Personnel & Student Services Vicki Calvert presented a calendar which would have teachers reporting to school July 28, with the first day of school starting Aug. 4.

The calendar would also have the first semester finals take place right before Christmas break as opposed to after the break as with the current calendar. Students would receive 180 days of instruction as opposed to 177 this year.

Superintendent Dr. Jeff James presented numbers to the board regarding studies he found on the sizes of high schools.

According to one study, James said smaller schools are more efficient with smaller class sizes, no larger than 20 to 22 students per class as opposed to 33-35 in larger schools.

Extracurricular activities including sports have a direct impact on student achievement, James said. Communities also lose their identity and property values go down in areas when a school closes, James said.

While closing a school saves $100,000 in maintenance costs, James said, the county system loses about $250,000 in income from the loss of administrative staff.

The school board also spoke about the capacities of the elementary schools and projecting which schools will be over capacity by the 2021-22 school year with the implementation of a new class size law which dictates the size of classes in grades K-3.

Millingport had the highest number with the school projected to be at 150 percent in 1.5 years, well over what James said is the recommended limit of a school capacity, 85 percent.

“If you take a school past 85 percent, you’re going to have teachers on carts,” James said.

Badin is projected at 107 percent, Central Elementary at 97 percent, Stanfield at 88 percent and Locust at 87 percent.

Chairman Melvin Poole said he had previously asserted North Albemarle School should not have been closed down and his warning of the problems it could cause are coming to fruition.

Capacity versus utilization, board member Patty Crump said, was important. Feedback she had received from schools like Aquadale were that teachers and staff did not feel crowded. Rooms were available for speech and physical therapists to get students out of classrooms.

“Capacity is one thing, but with utilization, they’re going to have even less space than what they can use (in classrooms),” Crump said.

More on the facilities will be discussed at Wednesday’s meeting of the SCS Facilities Committee. Board member Anthony Graves said if these matters are not settled for capacity, the problem will be talked around forever.

“These capacities without context are irrelevant,” Graves said. “Capacities are irrelevant to parents who believe their child should have an honest to goodness art room instead of art on a cart, which significantly limits the amounts of materials and activities that the art teacher can perform in the classroom.”

Board member Glenda Gibson said the board will have big decisions which may include expanding overcrowded schools or remodeling.

Graves responded to Gibson saying he gets frustrated about people talking publicly about closing schools.

“People get brainwashed into thinking that the only option is to close schools,” he said. “When we talk about expanding schools, people are going to go nuts. People think we have too many schools, but in reality, we are going to have to look at renovations because we are not going to cut classrooms in half and stack kids on top of each other.”

James also discussed a request from a group of Oakboro parents who would like to see the Choice STEM School in town transform into a Montessori-style school.

Montessori schools have more individually tailored lessons plans for each student and focus less on grades and more on students discovering concepts on their own instead of instruction coming directly from a teacher.

Lynn Plummer, director of curriculum and MTSS support for SCS, said students would have the same teacher for three years and be in groups of three grades in the same room starting with pre-K through first grade, second through fifth, etc.

Students would not have number or letter grades until reaching middle school, but they would take the appropriate End of Grade tests like students in other schools.

Park Road Montessori in Charlotte was the school Plummer and others visited to learn more about the style of teaching. Plummer said the school was diverse both culturally and economically.

The board also discussed what to do with the empty school facility in the Ridgecrest community, an item Poole said he wanted added to the list because the two precincts in the area passed the quarter-cent sales tax by a wider margin than any other in the county.

“We all owe it to the public to find a utilization for that building,” Poole said.

If none is found, the land could revert back to the heirs of the original owners of the property, he said.

Graves said Stanly Community College, who had expressed interest in using the facility, has wasted the board’s and superintendent’s time and have worn out his patience. He said with Locust and Stanfield nearly maxed out it’s hard to not to reopen an elementary school there.

Mandy Mills, director of Career and Technical Education, presented preliminary plans to the board for turning Ridgecrest into a vocational school with construction and metal working labs, auto mechanics and Junior Reserve Officer Training Corps along with possibly computer sciences, manufacturing classes and using the existing industrial kitchen to teach culinary sciences.

Mills and Maintenance Director Todd Bowers said the project could cost initially between $750,000 and $1 million.

Poole said a vocational school would not have to move in full on day 1, but taxpayers are paying for a building which is not being used.

“If people out there saw that something was actually coming, maybe they could sleep better at night,” Poole said.

He wanted to have a plan to show the Board of Commissioners either way before asking for the first penny.