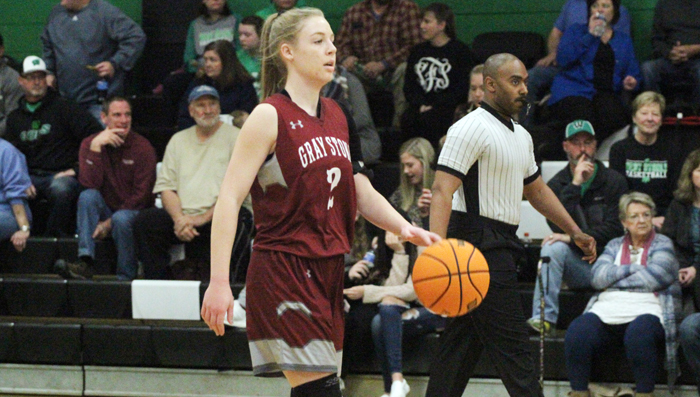 Danielle Werts sets the offense for the Knights in Wednesday's win at West Stanly. (Photo by Charles Curcio)

The strongest offensive effort the Gray Stone women’s basketball team has had this season came in a 70-42 non-conference win Wednesday night at West Stanly.

The Knights set season highs in point for the first half as well as overall.

“We couldn’t miss (in the first half). We were inside; we were outside. We were very balanced,” Gray Stone head coach Robert Stack said.

“(It was) the best 16 minutes of basketball we’ve put together. It’s great to come out of the gate like that.”

West’s 70 points allowed to Gray Stone was the most the Colts have allowed all season.

“We can rely on our defense. We know we’ll be good on the boards. When we can build a lead we feel much better we can protect that lead.”

Gray Stone opened with a 12-1 run and led after the first period hitting four times from the 3-point arc.

The Knights’ offense continued in the second quarter. Werts scores nine in the period and the visitors led at halftime, 41-24.

Stack said the team has good chemistry right now and is fighting for each other.

Werts talked about the offense for the Knights.

“Everyone on our team played their part and no one slacked…post were sealing and guards were getting open. Our shots were really falling tonight,” Werts said.