The Stanly County Chamber of Commerce has hired its next president.

Chamber Board Chairman George Crooker said on Thursday that Sandy Selvy-Mullis, who was serving as interim president and CEO, has accepted the position. 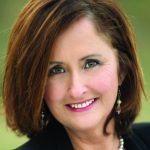 “She did a wonderful job in the interim process and we’re looking for her to take us to the next level,” Crooker said.

Selvy-Mullis was a former Chamber board member.

“I enjoyed my time as interim and look forward to helping the county grow,” Selvy-Mullis said.

“After two rounds of interviews, the Leadership Board considered multiple finalists,” Enamait said. “We are excited with our selection and believe that Sandy will build upon the foundation established by Kathy Almond and CEOs before her.”

During her more than 11 years as publisher of The Stanly News & Press, she became involved in the Albemarle Rotary Club, Albemarle Downtown Business Association, United Way of Stanly County, GHA Autism Supports and other organizations as a board member or collaborator on projects.