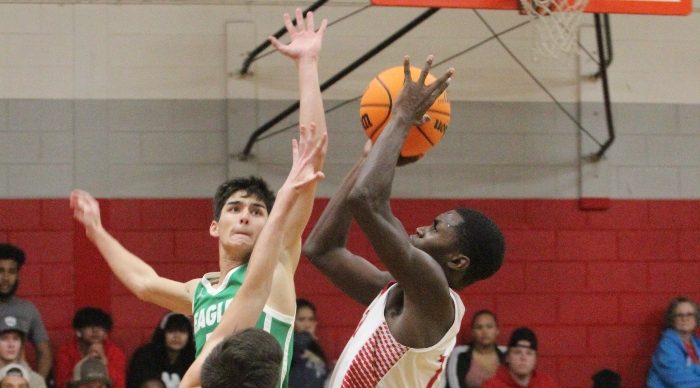 South Stanly guard Jaquez Cooke glides to the basket for two points in the second half of the win Tuesday over Uwharrie Charter. Photo by Charles Curcio

A furious fourth-quarter rally for the South Stanly mens basketball team lifted the Bulls to a three-point home win over Uwharrie Charter, 51-48.

The win coupled with North Rowan’s loss Monday at Chatham Central pulls the Bulls into a tie for second in the YVC with both teams having two losses in conference this season.

Jadius Jones added 16 points and a blocked shot midway through the final period which led to a fast break and layup by Cooke putting the Bulls up for good.

The Eagles slowed the tempo of the game in the first half building a double-digit lead. Uwharrie led by 12 in the third quarter before the hosts rallied.

South got within one on an offensive rebound and put back from Justin Gaddy with 3:29 left then took the lead when Jones blocked the Eagles’ next shot attempt. Cooke went coast-to-coast for the layup to put South up, 45-44.

Brandon Teller also came up with a critical basket after the Eagles got within one, hitting a floater in the lane with 1:46 left giving the Bulls a 49-46 advantage.

Trailing by three with the ball in the final seconds, the Eagles missed two looks at a 3-pointer then fouled with just under four seconds left. South missed the front end of a 1-and-1 o and the Eagles full-court heave came up well short.

South head coach Sean Whitley said the Bulls stepped up the team’s intensity after the Eagles’ box-and-one defense frustrated South and limited Gaddy, one of the team’s leading scorers, to four points.

”Our role guys stepped up in the moment. We’ve talked about being a team all the time. Those guys realized they could make a difference in the second half,” Whitley said referring to Jones and Teller.