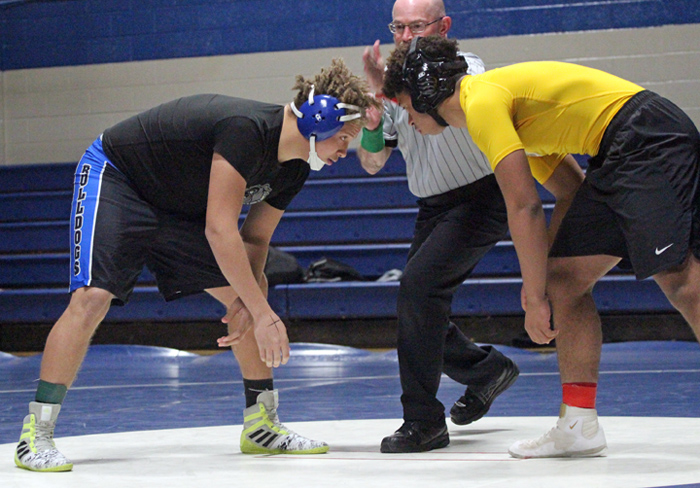 With the rebirth of the Albemarle wrestling program four years ago, this season marks the first for wrestlers to have competed with the team for four seasons, including Adrian Little at 195 pounds.

After reaching the 1A state finals at 195 last season, Little returned for his senior season on a mission to return to the finals. On the way to that goal, the senior reached a benchmark earning his 100th career win Tuesday night.

Little’s victory came in a pinfall win in 2:30 over Richard Patterson from R.J. Reynolds, a 4A school in Winston-Salem, in a home tri-match with the Demons and North Stanly. The win improved Little’s record this season to 23-4 and was his 17th straight victory.

The win also came in front of his family, which he said makes him a little nervous but he wanted them to be there when he had a chance to accomplish the feat.

Earning 100 wins means a lot, Little said, especially since he did not have the chance to wrestle in middle school.

“When I came in as a freshman, I never knew what wrestling was,” he said, adding midway through the year the sport really clicked with him.

Having good coaching and clicking with them was very important as well, the senior explained.

“We have the coaches and the potential to be back on top again,” Little said.

Dustin Foley, Albemarle’s head wrestling coach, said winning 100 matches is a big accomplishment for Little and for the program as well, with Little being the first to wrestle four seasons for the Bulldogs.

“He does things the right way. He comes in the wrestling room and wrestlers hard until we leave. You have to kick him out,” Foley said.

The physicality of wrestling has helped Little to compete in other sports, including playing linebacker on the football team.

“Wrestling helps you to tackle…it helps me keep a good position and have good hips,” Little said.

Winning a state championship continues for the Albemarle senior this weekend at the conference tournament, where Little looks to win again and move forward into regionals and then the state finals.

“I will keep working. Maybe not try anything new, but just do what I can do better,” Little said.

The missed chance at a state title continues to drive Little, who said he was right there and couldn’t get it so he had to come back stronger then ever.

The 195-pound wrestler added he knows he has to be mature with younger wrestlers and other community youth watching him compete.

“People are watching me…maybe they might also see I’m doing well and out here winning so they might come out and try it. You can’t play around; you have to have that mentality,” Little said.

Foley said Little is not afraid of the big moment adding he is an example of how to be successful in the sport of wrestling.

The coach added Little has a good chance to go back to the finals and is as good as anybody in a competitive weight class.

“There is a very small margin of error. I really like his chances with his work ethic.”