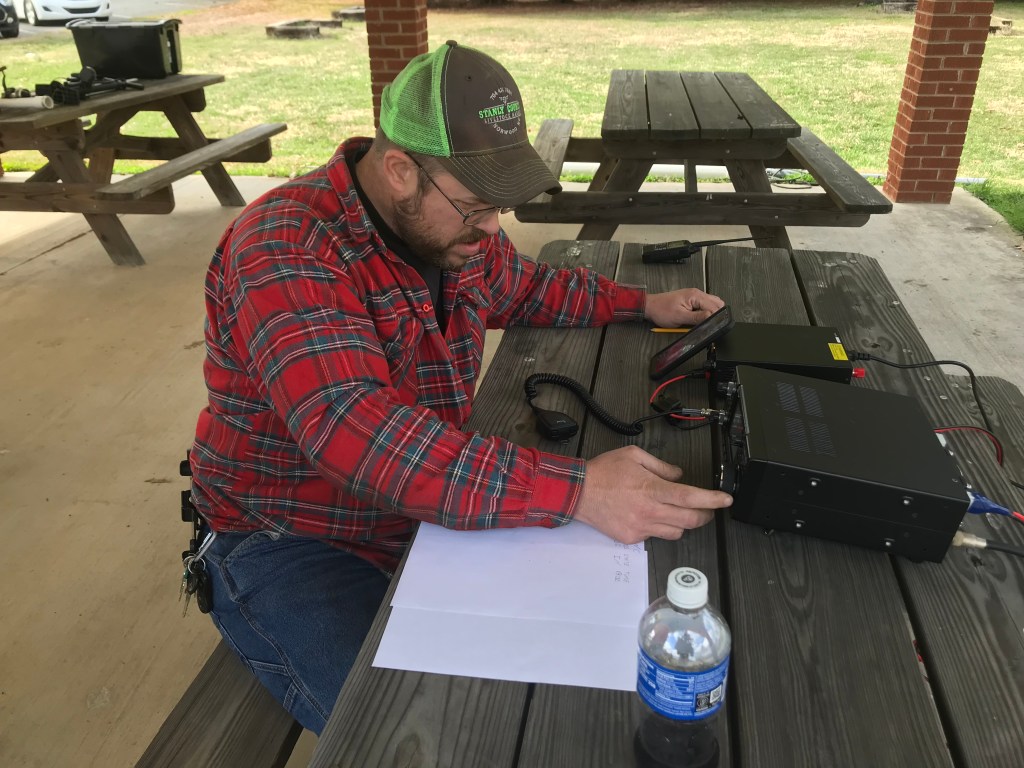 Larry Joe Almond was a teenager when he was first introduced to a passion that has stayed with him throughout his life.

One of the members of Anderson Grove Baptist Church took Almond to his house and introduced him to his Heathkit radio and Almond was immediately hooked.

Almond received his amateur radio license in 1956 and became a member of the Stanly County Amateur Radio Club a year later. He is still in the club — his call sign is K4MGA. He is currently the longest serving member.

“There’s a lot of things I could do without, but I would hate to do without ham radio,” Almond said. 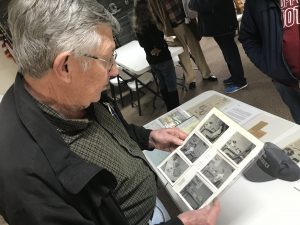 Larry Joe Almond looks at pictures of himself during the early days of the club.

Ray Sipe got involved with amateur radio after he traveled to the Gulf Coast with Lutheran Disaster Response to help with those affected by Hurricane Katrina. To better prepare for another possible disaster, Sipe and others in the area got their ham radio licenses.

Sipe, who is the president of the club, said he grew up enjoying radio as a kid.

Members of the club, along with people in the community, gathered Saturday afternoon at Mount Zion Lutheran Church in Richfield as Sipe gave a presentation about the history of the club. There was also historical memorabilia, including old radios and QSL cards, which are written confirmations of two-way radio communication between two amateur radio stations, on display.

The radio club was founded in 1956 and was created as a form of civil defense. The idea was to create a communication network around the county in case a disaster occurred. Members of the club are amateur (or ham) radio operators. 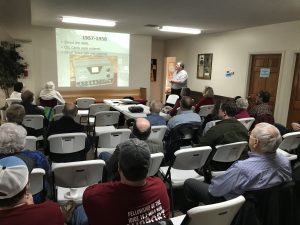 Ray Sipe presents a history of the Stanly County Amateur Radio Club to the public.

Over the years, the club, with a call sign of K4OGB and currently around 45 members, has grown and embedded itself in the county. Members help by providing radio communications for foot races, parades and festivals. They also organize electronic fox hunts to search for hidden transmitters and have a station in the basement of the courthouse they can operate if communications in the county somehow went down.

The club also works with ARES (Amateur Radio Emergency Service), which is a public service organization whose purpose is to supply communications during times of emergencies. Last year, the club contributed 1,027 hours of volunteer service with ARES, according to club member Dr. Keith Andrew.

There are currently almost 200 amateur radio operators with call signs in Stanly County, Sipes told the crowd. An instructor teaches a ham radio class at Stanly Community College and the club members help test the students and present them with ham radio licenses.

The club meets once a month at Stanly Community College and has special events such as summer and winter field days.

Stephen Merithew, who received his radio license in high school, has been a member of the club on-and-off for 20 years. He enjoys communicating with people from Europe and Africa on his Yaesu FT-920 radio.

“There’s a whole bunch of things we do, so we’re a very active and very busy club,” Sipes said.

Sipe told the crowd the club has something for everyone, as long as they have a basic interest in amateur radios.

“No matter what kind of interest you might have in amateur radio, there’s something for everybody,” Sipe said. “Whether it’s Morse Code, or it’s satellites, or it’s helping to run public service events like races…”