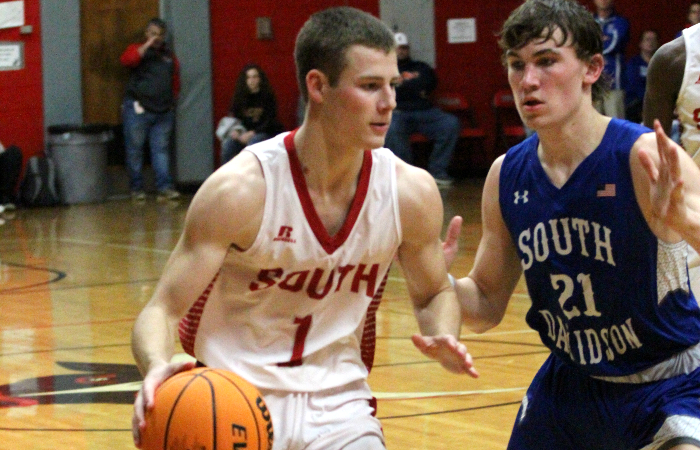 South Stanly senior guard Justin Gaddy had been within striking distance of his 1,000th career point since Tuesday, needing 31 to become the fourth men’s basketball player in school history.

The accomplishment came early in the first quarter Friday night on a fast break layup assisted by has backcourt teammate, Jaquez Cooke, as the Bulls rallied in the second half for an 84-74 win over the South Davidson Wildcats.

Bulls head coach Sean Whitley said Cooke and Gaddy are tough to guard and play well off each other:

“Quez kind of knows where Justin’s going to be. Justin knows how to find that space and trust Quez to get him the ball.” Whitley said.

”Justin is such a well-rounded player. He is a shooter that can put it on the floor and beat you too the basket. He also has that midrange game. It’s a testament to him to how hard he works,” Bulls head coach Sean Whitley said.

Gaddy credited his teammates and their efforts in helping him reach the milestone, especially Cooke.

”I bet half of my points have been assisted by Quez. I give him a lot of credit for helping me make that mark,” Gaddy said.

Gaddy said he and Cooke have played together since middle school.

”We know each other’s spots (on the floor),” Gaddy said.

Cooke said he and Gaddy believe in each other out on the court and have good communication.

The win keeps the Bulls in the hunt for a conference title but Whitley said the goal is to go as far as the team can in the state playoffs.

”We want to treat every game like a tournament (game). We’d rather not lose again,” Whitley said.

South Davidson (1-17, 1-11) maintained a lead for the majority of the first half but a Brandon Teller 3-pointer in the waning seconds of the half pulled the Bulls within one at halftime, 41-40.

A late run in the third quarter by South Stanly helped the Bulls pull ahead with the hosts leading at the end of the period, 67-55, capped by a Malik Kluttz 3-pointer in the final 15 seconds.