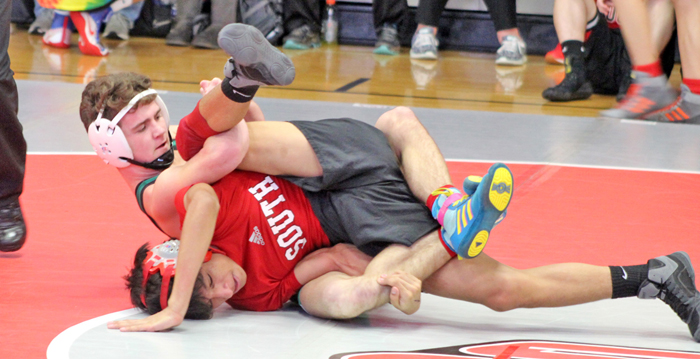 West Stanly's Aidan Hiott looks to get the pin in a match this season against South Stanly. (Contributed)

With the upcoming individual regionals coming up later this month, a West Stanly junior wrestler who earned his 100th career win this season prepares to return to the mat to challenge for a state championship.

Aidan Hiott, who had a 16-0 undefeated season interrupted midway through due to an injury, looks to return to the mat Feb. 14. at North Davidson High School in the 2A regionals after earning his 100th win Dec. 5 with a pinfall over Porter Ridge’s Syler Weber. It was the fastest any West wrestler had earned 100 wins in the program’s history.

Hiott said 100 wins was not really a goal for him, but more of an achievement which happened along the way.

“We are working towards winning a state championship because I got third there last year,” Hiott said of his finish last season at 120 pounds.

Wrestling in the 132-pound division this season, Hiott had 16 wins but a hip injury put him out of action for around four weeks, with his last win coming Jan. 9 over Montgomery Central’s Ivan Jaimes. The injury also kept him from wrestling in last weekend’s Rocky River Conference tournament.

Like many wrestlers for the Colts, Hiott wrestled for head coach Darrel Watson at West Stanly Middle, but the West junior had wrestled some while in elementary school as well. In his time at middle school, Hiott only suffered one loss to a wrestler who he met last season in high school and defeated.

Watson, now the head coach at the high school, taught Hiott how to get better at the basics of wrestling and implementing them back in middle school.

“He’s been with me throughout these past five years, going on six,” Hiott said.

West’s head coach said he noticed Hiott’s competitive nature right away when he first saw him in middle school.

“If we sprint or anything in practice, he had to be first. He can not stand for anybody to beat him and that carried on to the mat,” Watson said.

He said everyone hates to lose, but Hiott’s nature makes him hate to lose on a different level.

Hiott’s competitive nature is illustrated by the one loss he suffered in middle school, which he carried for three years until the two met in the high school ranks last year where Hiott won.

The West junior said he felt his strengths on the mat came from both the neutral position, when both wrestlers are standing, and when he is on the bottom. He also said the time he spends weightlifting has helped him use his strength more on the mat.

Where many wrestlers earn win No. 100 as a senior, Hiott did it one year earlier, which he said comes from the number of harder tournaments the Colts compete in.

Hiott said he does not like to scout opponents, preferring more doing what he wants to do on the mat and focusing on himself.

In practice, Watson said Hiott knows how to keep himself sharp because the wrestlers are there to get in their own workouts and train themselves, because in wrestling you are out there by yourself on the mat.

“He takes it seriously,” Watson said. “They have to learn an independent mindset and still be part of the team and the big picture.”

Sitting at 112 career wins, Hiott will look to challenge next season the school record of 155 wins set by Jake Balmas. But for the moment, the focus is on regionals where Hiott is ranked first and has never lost in two seasons.