Stanly County School Board Vice Chairman Ryan McIntyre, who was elected in 2016 as part of a group of five people on a platform of community-based schooling, is running for re-election in District 5 in the March 3 Republican primary. He will face Carla Poplin.

McIntyre, who had run unsuccessfully for Albemarle City Council the year before, said he was motivated to run for school board after getting involved in that issue. He also wanted to help Stanly County Schools be a more fiscally responsible entity while creating a better learning environment across the county. 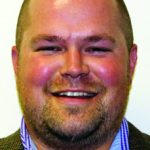 He said he also ran because he wanted to ensure students would have a more equitable opportunity for an education.

In his time on the board, McIntyre said one of the group’s most important achievements was to give its stamp of approval of the hiring of SCS’s superintendent, Dr. Jeff James.

“The guy was just bursting with knowledge of how to create new opportunities in how we offer education to our students,” McIntyre said, noting the expansion of STEM and the international baccalaureate programs.

“The really hard work is done by the folks in the central office, and most of all, the principals and our teachers. At the end of the day, as much as some people want to give us credit for things or blame, we are not the ones having to do the heavy lifting,” McIntyre said.

The role of the Board of Education, he added, is to give guidance while also showing accountability for what Stanly taxpayers are funding.

As a conservative person, along with being Republican, McIntyre said he never wants to see Stanly’s citizens overtaxed or have a burden placed on them by the government.

While some would argue reopening Oakboro, he added, may not have been the most fiscally responsible thing, McIntyre said it was what the community wanted and what he and others ran on in 2016.

“If the taxpayers tell us to provide community schools, it’s our job to provide that in a responsible way,” McIntyre said.

He said opening the school was a huge blessing because the state has come through with class size allotments for younger students. Elementary schools in the western part of the county are projected to end up over capacity in the next two years, McIntyre said, which would have been an even bigger problem had Oakboro not reopened.

Numbers from the state are determined on the average daily enrollment (ADM), but McIntyre said one still has to take into account what is the best learning environment for students.

“You have to consider more than the school system when you think about providing an equitable education using the tax dollars you have to do so,” McIntyre said.

With the current Stanly County Board of Commissioners all being conservative Republicans, McIntyre said voters know anyone taking office will not be raising property taxes so one has to work with a limited about of money.

“You as a school system are going to have to see how to make it work. There’s always give and take,” he said.

With all the options for education now, including homeschooling and charter schools, McIntyre said competition is a good thing and has pushed SCS to improve.

“You have to figure a way to make people want your product. I believe we are doing that by offering different forms of education,” McIntyre said, noting programs like Endy’s dual language immersion and the IB program at North Stanly High. “You always have to stay competitive.”