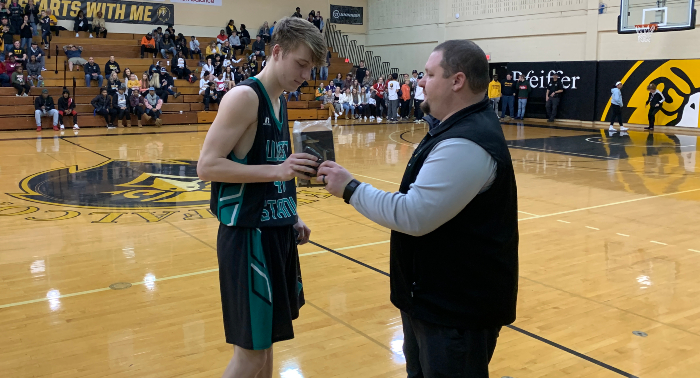 West Stanly's Austin Medlin was named the 2019 Rocky River Conference Player of the Year. He was presented with his award after Friday's RRC tournament finals. (Photo by Charles Curcio)

West Stanly entered Friday’s RRC tournament finals at Pfeiffer University with the undefeated Forest Hills Yellow Jackets with an important addition, getting its second leading scorer, Trevor Kelly, back in the lineup.

However, the Yellow Jackets, ranked fourth in the state in the 2A by MaxPreps, built an early lead by dominating the rebounding numbers and never looking back, moving to 25-0 on the season with a 69-53 win over the Colts.

Alec Topper topped the Jackets with 16 points and a game-high eight rebounds, while Jalen Huntley added 13 points and Tyveon Burch scored 11 off the bench.

For the game, the biggest advantage the Jackets had was on the glass as Forest Hills out-rebounded West Stanly 43-21. The Jackets shot slightly better from the field at 48 percent to West’s 39.2 percent and connected more times from 3-point range (6 to 4) and at the foul line (15-of-20 to West’s 9-of-18).

West handled the ball well in the game, only committing five turnovers and generating seven steals on defense.

The Jackets jumped out to an 18-7 advantage before West pulled to within six in the final minute of the first period on a Kelly 3-pointer.

The first half was fairly even in terms of shooting from the field with West going 9-of-24 and Forest Hills hitting 11-of-26. However, the Jackets hit two more 3-pointers and were 7-of-9 at the line, helping to build a 33-24 halftime lead.

Haywood’s spinning drive down the end line with 4:04 left in the third quarter got the Colts with within three, 33-30. A 10-0 run for the Jackets over the next three minutes put the Jackets ahead double digits for the majority of the remainder of the game.

“We took care of the basketball pretty well and that’s really good against (Forest Hills),” West head coach John Thompson said. “The biggest difference in the game was rebounding. It was a team effort (for the Jackets).”

Thompson added Forest Hills is disciplined, playing unselfishly but he still liked the fight his team showed against the Jackets.

West Stanly will play in the first round of the 2A state playoffs with brackets to be announced Sunday afternoon.

“We’ve lost a bunch of close games this year and I’ve told them it’s just one or two possessions that make such a difference. It does not matter if they’re in the first or fourth quarter. We have to bear down and play a little smarter,” Thompson said about the state playoffs.