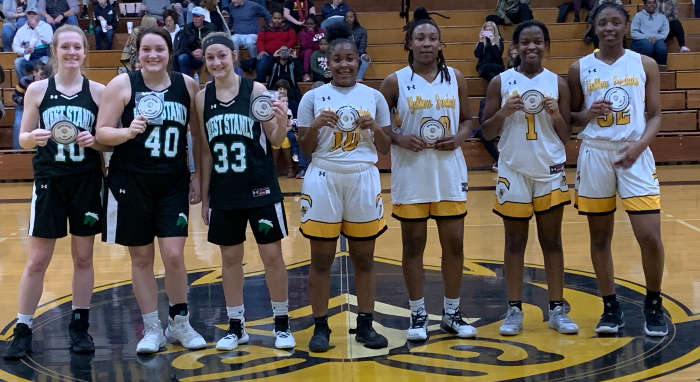 The finals of the Rocky River Conference basketball tournament saw the West Stanly men’s and women’s teams both face off versus Forest Hills, the top seeds in the respective brackets.

In the opening matchup, the West women fell behind early and never led in the games as the Jackets captured the tournament title plaque, winning 61-42.

The frontcourt combination of Jamyah Blakeney and Hope Benson provided to be too much inside for West (16-10). Blakeney led the Jackets (18-7) with 23 points hitting 8-of-18 from the field while Benson added a double-double with 10 points and 12 rebounds. Tiana Sloan also reached double figures for Forest Hill with 11 points.

Forest Hills’ size advantage down low helped the Jackets open a 12-3 lead over the first six minutes of the game. Forest Hills led by nine after one quarter and at halftime.

The closest West got in the game was in the final period, when twice baskets from Kailey Furr pulled the Colts within five points with 5:15 left in the contest.

Colts head coach Chad Horn said the final score did not indicate how close the game was late.

“We hustled well but we didn’t capitalize on a couple of rebounds,” Horn said.

West will now await its first-round matchup in the 2A state playoffs when the brackets are released Sunday afternoon. First-round games are scheduled for Tuesday.

Horn said it will be important for West to have confidence in themselves heading into the state playoffs.

“We can play with anybody. Forest Hills is a great team ranked well in the state and our confidence in how well we stayed with them should help us,” Horn said.