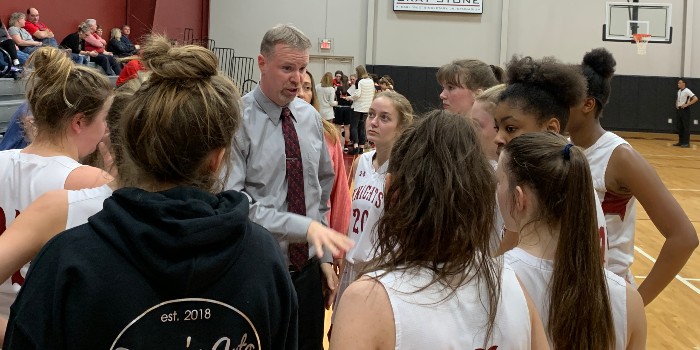 Defense has been an aspect of the game the Gray Stone women’s basketball team has relied on for many years under head coach Robert Stack.

The Knights, seeded fifth in the 1A West, opened the state playoffs Tuesday night shutting down Avery County early while building a big lead, never trailing in a 66-28 win over the Vikings.

The Knights’ defense forced numerous turnovers in the first half and did not allow Avery County (5-21) to score for nearly a quarter and a half. Gray Stone scored 21 points over the first 11:36 of the first half before the Vikings got on the board.

“Our defense provides our energy, our offense. We live off the defense and we pride ourselves (on our defense),” Gray Stone head coach Robert Stack said.

The Knights’ coach said he was glad to see his team’s defensive intensity back after the defense had broken down lately. In Gray Stone’s last game, the Knights allowed 52 points in the Yadkin Valley Conference tournament finals to North Rowan, the second-most points in a game the team had allowed all season.

Part of the team’s defense in the win came from Robinson, who said her 6-foot size frame and long arms help her to intercept passes at the top of the Knights’ defense.

“It’s all about doing everything you can do to disrupt their offense, shake things up and try to get (opponents) off balance, get them to make mistakes,” Robinson said.

Defense is also important, the junior guard added. The team, she said, can always rely on its defensive consistency even when the offense may be off to start games.

Gray Stone will host No. 21 Hiwassee Dam at 6 p.m. Thursday in a second-round playoff showdown. The Eagles advanced with a 49-31 road win versus No. 12 Christ the King.