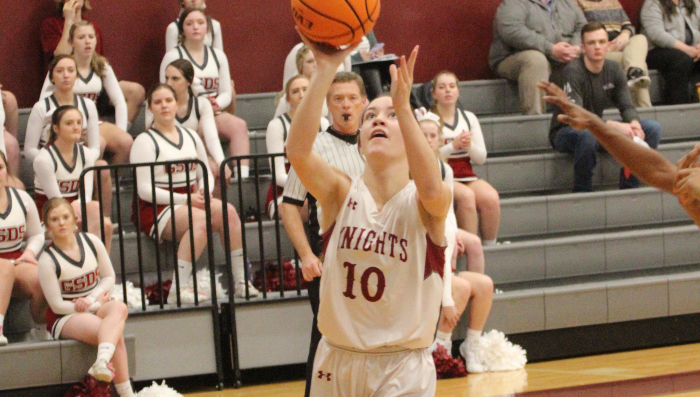 Margaret Huckabee goes for a layup in a game this season. The sophomore hit key free throws in the fourth quarter to ice Thursday's playoff win over Hiwassee Dam. (File Photo)

Only one other time this season has the Gray Stone women’s basketball team trailed as late in a game as the Knights did Thursday night at home versus Hiwassee Dam, when the Knights suffered the team’s only loss of the season Feb. 7 to North Rowan.

Behind by two after three quarters, the Knights (25-1) rallied in the fourth and got clutch play from a guard off the bench to earn a 45-38 second-round playoff win versus the Eagles.

Margaret Huckabee ran the point guard for a critical four-minute stretch to start the fourth quarter and hit clutch free throws in the final period to help lift the Knights to the win.

She started the final period for the team’s leading scorer, Danielle Werts, who played for the Knights but was hampered from flu-like symptoms.

Neither team built a big lead in the first half, with the score tied at halftime, 18-18. The Eagles led 30-28 after three periods but the Knights’ offense started to connect.

In the opening minute of the fourth, Seccora Medley tied the game with a bucket then one Huckabee free throw a minute late put the Knights up by one, 31-30.

The No. 5 seeded Knights pushed the lead to six with a 3-pointer from Seccora Medley but the Eagles answered when Kiara Anderson connected from long range to pull Hiwassee Dam within three, 39-36.

With 2:30 to play, the Eagles had two chances to take the lead with two attempts right at the basket but both rolled in and out. Jenna Robinson stretched the lead back to three for Gray Stone, 41-38, with a 15-foot jumper from the end line seconds later.

Huckabee made it a two-possession game with 19.6 seconds left hitting both ends of a 1-and-1 to secure the win.

“(Huckabee) doesn’t realize the moment whether it’s ice in her veins or whatever. She just gets out there and plays. I think that’s what you want and what allows her to be so successful in those situations,” Knights head coach Robert Stack said.

The Gray Stone coached added the team tried to adjust its defense on Gibson in the low post, getting help from the guards to double-team her.

“We knew the guards had to come in and help out,” Stack said, adding the team’s family atmosphere is bigger then any one person or the game itself.

“I had to focus on the moment. I knew (the team) believed in me. I felt the energy from the bench,” Huckabee said.

“They know they’re having a phenomenal season and they want to just keep it going,” Stack said.

“(The win) shows just how hard we can fight,” Huckabee said.

“Even if we’re down we can come back. When we all come together we can do anything.”