Voice of the Colts retires from teaching, coaching at West Stanly 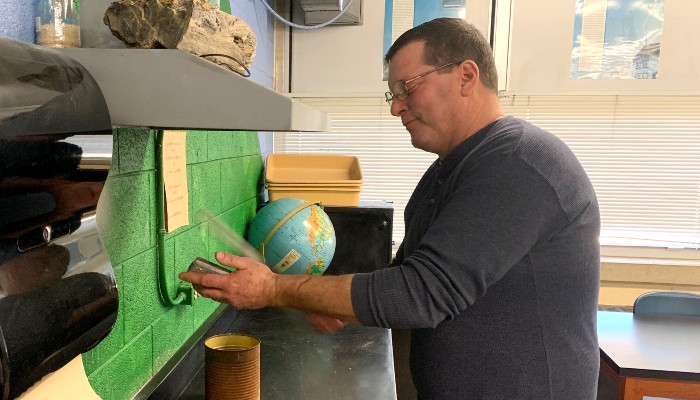 Mark Rowles cleans his erasers for the last time before retiring after more than 28 years of teaching at West Stanly High School. (Photo by Charles Curcio/staff)

His voice is synonymous with West Stanly High School, whether the voice echoes down the halls of the second floor of the main building, from the speakers sitting atop the press box at Larry Wagner Field or crossing the school’s gymnasium or other fields.

After 28 years and two months, Mark Rowles recently retired from teaching earth science and coaching swimming, one of many sports he has coached over the years.

Rowles, a Pennsylvania native, announced football for more than 20 years, along with announcing basketball games for between 16 and 18 seasons.

Coaching-wise, Rowles coached seventh and eighth grade football for 15 years, swimming for nine, golf for five or six and track for a couple of seasons, along with being an assistant softball coach for a couple of years as well.

Despite having served the school and community in various ways, Rowles said the school has done so much for him.

“That’s been my attitude. The more I put into West Stanly, into my students, the teams I coached, the games I announced, the more everybody gets out of it,” Rowles said.

The extra time he spent in the various activities was his way to earn the summer off, he said.

“The weeks in summer I wasn’t coaching or teaching I might come up and mow…that’s how I look at those extra hours. A lot people say, ‘You get summers off.’ No, I earned this,” Rowles said.

Many times when coaching football, Rowles said he found himself spending more time with other people’s kids than his own.

At the same time, his children have been coming to games announced by their father since they were old enough.

Bud Smith, a former principal at West Stanly, said the school will definitely miss Rowles, whom he compared to a Swiss Army knife with all the things he could do.

“They weren’t high profile things that everyone was jumping to do. But anytime you needed something, especially in a pinch, he was willing to help you out. He was a guy who made school a pleasure,” Smith said.

Having worked at West Stanly straight out of Asbury College, Rowles said the community immediately welcomed him in.

“There were people helping to find me houses to live in, churches to attend, even inviting in for supper to make me feel welcome,” Rowles said.

One might be surprised to find someone refer to themselves as an introvert despite announcing before huge football crowds or packed basketball gyms, but Rowles does.

“You put me in a crowd of people to socialize and I’m out of my world. That’s the thing with announcing. I can sit up there (in the press box) and talk to everybody, but I don’t have to go up and have a conversation,” Rowles said.

For Rowles, even the first day at West Stanly, his first impression was how nice the students were. Those students are now parents of students whom Rowles taught as well.

Rowles said early in his career he hoped he would be the kind of teacher people would look back on and speak highly of them.

Rarely has Rowles been absent from school except for eye surgery last year, saying he has been fortunate and blessed in his time at West.

“You could set your watch by him. You knew he was going to be there every day and things were going to get done in the right way,” Smith said.

Having taught for as long as he had, Rowles said the rapport he had with students changed over the years. When he was younger he could relate more to students, whereas his final years were more like a parent.

“He had a way of rubbing off on so many people with his positive attitude…he could work with any student from any kind of background,” Smith said. “He also had a way with adults. He was people-oriented, who just resonated with just about everyone.”

Education to Rowles was always less about a teacher making students do the work and more about taking them on a journey.

“Let’s go and see what we can learn…I tell my kids every day I’m their biggest fan,” Rowles said.

For the future, Rowles said he does not know what he will be doing, but he said looking back, his time at West has been amazing.

“If my time at West was good it was because it was a gift I was blessed with. We all have abilities, skills and talents that make us unique,” Rowles said.

His final piece of advice?

“Be unique by being good at what you can do.”