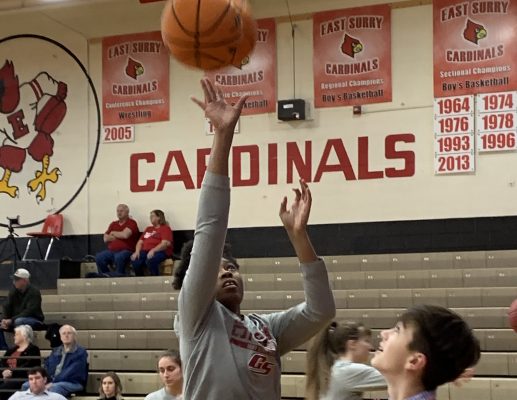 Gray Stone senior Seccora Medley works on her shots at the basket during warm-ups before Saturday's playoff game at East Surry. (Photo by Charles Curcio/staff)

That streak ended as East Surry came out strong in the first quarter, quickly building a double-digit lead on the way to a 65-44 win over the Knights.

Seccora Medley led Gray Stone (25-2) with 18 points in her final game with the Knights. Senior Danika Ray added 12 and Danielle Werts had seven.

The Cardinals opened the game with a 7-0 run over the first two minutes and never trailed, leading 25-8 after the first quarter on a bank-shot 3-pointer.

East Surry maintained a 20-point lead for the remainder of the game.

The Knights finished the season 25-2, matching the school record for most wins set in the 2016-17 season. Gray Stone also finished with a 92.6 win percentage, setting a school record.

“(East Surry) made the game fast and we just didn’t settle in quickly enough and they turned that into quite a walloping in the first half,” Gray Stone head coach Robert Stack said.

Stack said getting behind early took the Knights out of what they wanted to do and it took his team time to recover.

“In the second half, we showed we’re capable of playing with them. They were just better tonight,” Stack said.

The Cardinals will play Tuesday at the top-seeded Murphy Bulldogs, who won Saturday over Cherokee 63-44.

Stack said this season was all about everyone being a family, taking on every single challenge.

“It’s never about one person…it’s about Gray Stone. It’s about the girls who worked hard and suffered a lot of defeats and the girls who are to come. If we keep that mentality, everything works out.”