Jam session for one Albemarle resident turns into big event 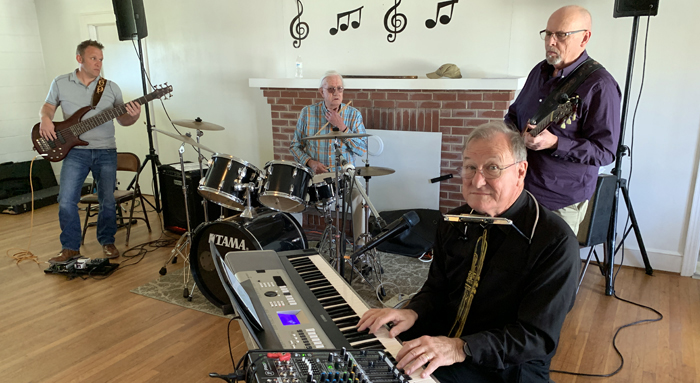 He dreamed of getting back behind a drum set to perform with others for the first time in 20 years. However, local musician Yoder Whitley never thought so many would want to be there.

Sunday afternoon saw the Helderman Cottage in Albemarle come alive with the greatest hits of the 1940s and 1950s at a combination jam session/concert featuring local musicians.

Whitley, a long-time Albemarle resident, supporter of Bulldogs football and musician, was the catalyst and central figure of Sunday’s events.

In his lifetime of playing music, starting in 1955, Whitley played with several local bands including The Jerry Goodman Band and the Josey Brown Band.

A crowd of approximately 75 people gathered to enjoy a range of music from the two decades, including blues like “Hoochie Coochie Man,” standards like Louis Armstrong’s “What a Wonderful World” and popular hits like “Under The Boardwalk” by The Drifters.

During a break, Whitley admitted he did not think so many people would come to the event.

“I didn’t have any idea…it’s those people that long for (this music),” Whitley said. “I cut my teeth on the music.”

Whitley’s oldest daughter, Laura-Beth Marks, said the event started because her father had expressed the desire to sit behind a drum kit one more time.

“He played drums his whole life in many different bands, but hasn’t played as much other than at home. He started talking about getting some friends together at his house to play,” Marks said.

Music was a part of her childhood, she added, including the times he played in German music bands for Oktoberfest celebrations. Both she and her sister played piano and their father would always play the drums.

“He was always playing his records; he has a huge collection,” Marks said.

Once word got out about the event through social media and other ways, the number of people coming grew too large for his house.

So the family asked Kenneth Helderman if the event could be hosted by the Helderman Cottage in Albemarle next to Atrium Health Stanly.

“(Yoder) is an old friend of mine,” Helderman said, noting he has known him since around 1945.

Putting the Band Back Together

Some former bandmates of Whitley were unable to play due to health issues or other problems, but the drummer pulled together three other musicians.

One musician, Jerry Herbert, had not played with Whitley for 40 years or more. Herbert, who continues to perform at the Cactus Rose in Indian Trail as well as private parties, sang vocals while playing his synthesizer.

When a trumpet was needed for some songs, Herbert simply provided a mouth trumpet to the amazement of those in attendance.

“It makes my heart sing,” Herbert said of performing with Whitley and the overwhelmingly positive response from the listeners. He said he was happy to have this many people and visit people he had not seen in 40 years, including Whitley.

Helderman said hearing the songs from those decades and the men performing them reminded him of performances from the era.

“It was just about like it was back in the old days,” Helderman said.

Whitley’s oldest daughter said it was amazing to see so many people at the event.

“As generations go, the music changes…but some of the music is timeless,” Marks said, noting her daughter said she would not know the songs but she assured her she would.

“(The music) is something people will remember forever.”