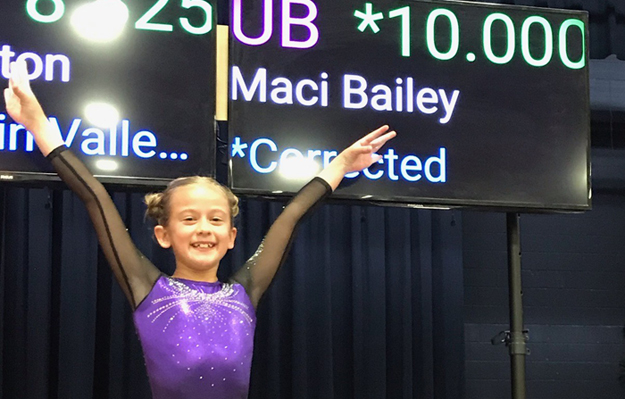 Maci Biley scored a perfect 10 on the uneven bars. (Contributed)

Stanly County Gymnastics, for more than 30 years, has been training young men and women from 18 months to 18 years old in the finer points of the sport.

In all that time, one thing had eluded the many participants in the various events: a perfect 10, the Holy Grail of gymnastics.

Maci Bailey, 9, became the first gymnast from SCG to earn a perfect 10, which she did on the bars apparatus at this season’s Think Pink Meet in Mebane.

In her age level, gymnasts perform routines on the shortest of the uneven bars and do 15-second routines. Bailey pulled herself on the bar, did two casts with her legs 90 degrees to the floor and followed it with a back hip circle. After one more cast, she pulled herself up to stand on top of the bar, then dismounted and stuck the landing. It was the first time she had finished over the bar instead of under.

“I like bars. It’s my favorite event,” Bailey said. “I like doing all kinds of tricks on the bars, doing the cast and jumping off the bar.”

After completing her routine, the young gymnast said she did not know her routine went that well until the judges posted her score.

“I was kind of excited when I found out,” Bailey said, adding her routine at the Mebane event felt different.

Other times she had performed her routine on the bars in meets, she said, had been just that — routine, without the high scores like she received this time.

Alicia Bailey, Maci’s mother, said the judges on the whole at the Mebane meet were scoring much lower then normal, which added to the shock of seeing a perfect 10 come up on the scoreboard.

Maci’s mom said it was a perfect routine.

Not only did she cry, Alicia said, but other moms cried and hollered when the score posted.

“It was amazing to see everyone that was not even with Stanly County cheering for her,” Alicia said.

Bailey also placed first in the all-around competition at the Silver level with 38 out of a possible 40 points.

Alicia said she hopes other teammates of her daughter will also post perfect scores.

“(Maci) has some great friends with great parents and I want it more for the coaches, too. They work long, hard hours and it shows how much dedication and love they show,” Alicia said.

Maci said she has Olympic dreams and she knows it will take many more hours in the gym to achieve it.

“We are extremely proud of Maci’s accomplishment. This perfect 10 … is a testament to the hard work and dedication the girls show to the sport,” said Holly Pennell of SCG.