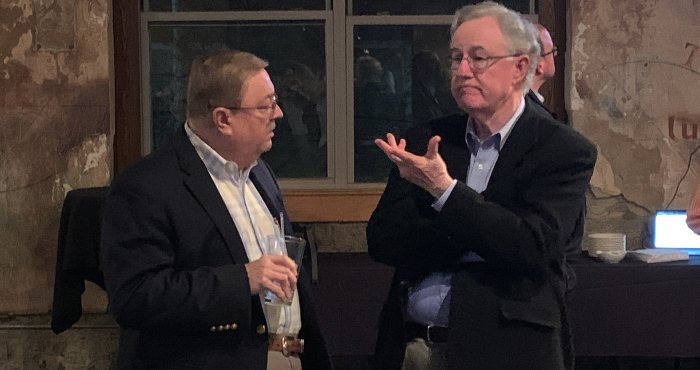 Jeff Chance with school board member Rufus Lefler. Chance resigned from the school board at the end of Tuesday night's meeting. (Photo by Charles Curcio/staff)

Two developments involving the makeup of the Stanly County Board of Education came out of Tuesday’s Republican primary elections.

The first saw Rufus Lefler III unseat the board’s chairman, Melvin Poole, while the second had Poole talk of running for state office.

“The win means a lot to me, but it’s more about the people working for me than what I was able to do,” Lefler said at a rally for himself and fellow winner Carla Poplin at Five Points Public House.

“I had a good group of people working the early voting and all during the election.”

Lefler said he looked forward for the school board to have more cohesion and get more done for the whole county, and to have everyone involved.

At Stanly County Republican headquarters Tuesday, before commenting on the results of the primary, Poole said he was considering running for the N.C. House of Representatives next election.

“We need a representative in Raleigh that can get a budget passed. The one we have is not getting one passed, simple as that,” Poole said. “I’m tired of somebody going up there playing around not getting the job done.”

Regarding Tuesday’s results, Poole said he and the board have gotten a lot of good things done in the past few years.

“It’s been worthwhile,” Poole said. “The citizens of this county have given me 22 years to serve them and I appreciate it very deeply. We’re just looking to bigger and better things.”