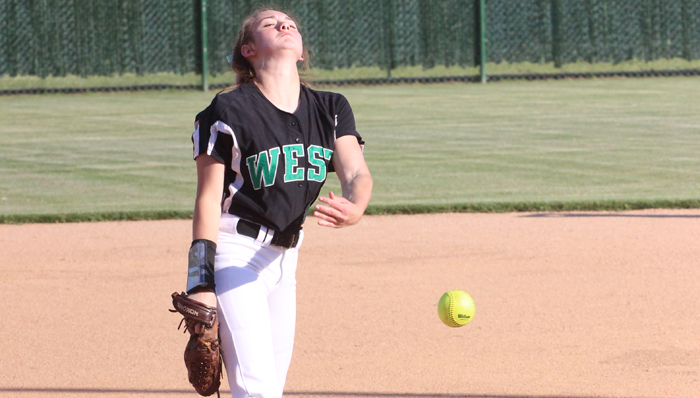 The 2019 Gatorade High School softball Player of the Year for North Carolina Jordan Hatch returns this spring for her junior season with West Stanly. (Photo by Charles Curcio/staff)

As one Stanly softball squad looks to repeat its success at the state level, four others look to make their mark in 2020.

Ranked No. 1 in the state regardless of classification by MaxPreps, the Colts’ expectations could not be higher for head coach Craig Carter (third season, 53-4 with West Stanly, 122-37 overall) even after having graduated four players from last season’s 28-2 team which won the 2A title. Starting catcher Rosalyn McRae graduated along with outfielder Jordan Johnson, starting 2B Megan Stockton and utility player Karsyn Furr.

The team’s strength will be the regular starting battery for West Stanly, with Shelby Barbee moving from third base to behind the plate to catch for North Carolina’s Gatorade State Player of the Year, pitcher Jordan Hatch (28-2, 0.54 ERA, 195 IP, 364 K). Barbee hit .488 for the Colts in 2019 with 14 home runs, 43 RBIs and a .583 on-base percentage.

Carter said the team has a challenging schedule, which he hopes will get the team ready for another long playoff run.

“We have had very intense tryouts with a lot of hustle and intensity and I firmly expect to have this group ready for the rigors that are before them this year,” Carter said.

The team’s goals are to defend the Rocky River Conference regular-season and tournament titles along with West’s 2A state title.

The Rebel Bulls’ goals for the season could not be any higher after going undefeated in Yadkin Valley Conference play last season, posting a 22-3 mark overall for head coach David Poplin (15 seasons, 280-110 record).

Returning for South will be the team’s leadoff hitter, shortstop Kaitlyn Tucker, who is committed to Presbyterian College next season. Other returning starters for the Bulls include seniors Huntley Rummage (2B/CF), Adrianna EFird (3B) and Mattie Hinson (C) along with All-SNAP junior pitcher Sadie Lee and designated player junior Holly Barrier. Sophomore Emma Campbell also returns as a starter for South. Emma Crump returns to the outfield for the Bulls after missing the majority of last season with a injury she suffered during basketball season.

Jackie Burris, a junior, takes over at first base while another junior, Savanna Hurley, will backup Hinson behind the plate and be a key pinch hitter for South.

Competition for the last position in the outfield will be between seniors Chloe Rabon, Rilie Hardister and Rachel Huneycutt.

Sophomore Ali Glover will also see time in the pitching circle for South.

Poplin said the team has a number of newcomers, and for the first time since 2012 South Stanly will field a JV team.

“Our expectations are extremely high. (The) ultimate goal is to win the 1A state championship,” Poplin said.

The Comets return three upperclassmen after finishing 15-7 last year, reaching the third round of the state playoffs in 2019 under head coach Greg Speight.

North will be led in the pitching circle by Merris Talbert, a four-year starter for the Comets who was one of three players on the team from the Comets’ 1A state title squad in 2017.

Payton Landis returns for her senior season, another four-year starter in the outfield. Landis will play in center field and can also back up Talbert on the mound. Senior Meghan West will play some in the outfield and help North at the plate.

Sophomore Callie Parker will likely move from shortstop to catcher; Speight said Parker has a good arm and he expects she will have a big year hitting.

Reagan Speight returns at first base, another sophomore who can pitch and hits well, while Madison Browers and Hunter Helms round out what Speight feels will be a great defensive outfield.

The biggest questions for North is on the infield where the Comets may start three freshmen, including Mackenzie Myers at second base. Georgia Mullis and Makyla Noll may also see time starting at third. Mackenzie Barringer is a utility freshman who may play different positions, while Holli Burleson and Sophie Waller round out the Comets.
“We have only practiced three times, but I love this team’s work habits and attitude.  Our schedule is tough and our conference is strong at the top, but I expect us to do great things,” Speight said.

Buddy Gardner, who was an assistant coach for the Knights’ team last season which went 7-9 overall, takes over as the head coach.

New for the Knights will be freshman Andrea Furr, who will share duties on the mound.

Other freshmen new to the team are infielders Abbey Jordan and Jeannie Thomas and outfielders Lily Efird, Corbin Barber and Karlee Clontz.

Gardner said the goals for the team in 2020 are to be competitive and learn, improve on last year’s record and have fun.

Brian Bradshaw will coach the Bulldogs after the team did not post a win in 18 games last season. Loretta Slade will be assistant coach.

The Bulldogs lost one senior from last season in Emma Freeman and will have one upperclassman this season in junior Makiyah Tyson (SS/2B).